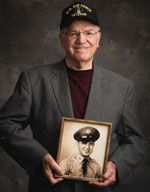 He is survived by Helen Beadles Hodges, his wife of 67 years. Also surviving him are his children. Nancy Douglas (Charlie,) Kathy Herbert (Bill,) Mark H. Hodges III (Karan,) Helen Wylie (Larry) and Audrey Hodges. He also is survived by his grandchildren, great-grandchildren, brothers and a sister.

Mr. Hodges was a member of the Virginia Air National Guard and served on active duty with the U.S. Air Force during the Korean War. Prior to his military service he was employed with the C&O Railway. After being discharged from the Air Force he entered the U.S. Postal Service as a substitute clerk. He served in many capacities during his USPS career including personnel officer, chief accountant, assistant director of operations, assistant postmaster and was appointed Sectional Center manager/postmaster, Norfolk, Virginia.

He retired from the Postal Service on March 29, 1985. Following retirement, he accepted a position with the Virginia Department of Military Affairs as a civil engineer.

Mr. Hodges served his church and community in a variety of ways. He was a member of the Ruritan Club, deacon at church, Little League baseball and football, 60-year member in the Varina Masonic Lodge No. 272, a 32-Degree Scottish Rite Mason and a former member of the ACCA Temple Shrine.

Mr. Hodges always thought of his family first, and he was a loving and generous father and grandfather.

There will be a private graveside service at Hardy Central Baptist Church, Henrico, Virginia, at 11 a.m. on Wednesday, April 25.

In lieu of flowers, memorial donations may be made to the Courtland Baptist Church or a charity of your choice.