FRANKLIN — Shirley Porter Drake, 96, passed away peacefully on April 20, 2018, in the East Pavilion. 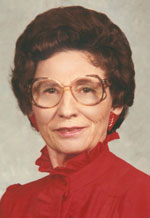 Mrs. Drake was a native of Southampton County, and was a daughter of the late Fenton A. Porter and Susie Miles Porter Davis Coleman.

Mrs. Drake was a graduate of Boykins High School, and had been an active member of Franklin Baptist Church.

She had been a member of the Ladies Auxiliary of Southampton Memorial Hospital and had been a long-time Pink Lady at the hospital.

The funeral will be held at 11 a.m. on Tuesday, April 24, in Wright Funeral Home with the Rev. Steve Gibson officiating. The burial will follow in Poplar Spring Cemetery.

The family will receive friends on Monday from 6 to 8 p.m., in the funeral home, and suggests that memorial donations be made to Franklin Baptist Church.

The family would like to thank Mrs. Drake’s caregivers: Beverly, Kimberly, Cynthia , Tonya, Molly, Rico and the staffs at the Village at Woods Edge and East Pavilion for their thoughtful care of our mother.