Breaking back to the Nottoway

Spirit of Moonpie and I spent the 17th through the 19th on the Nottoway below Delaware. The water was colored, rising and 60 degrees. Air temps ranged from 42 to 75 degrees, it was nice weather save for the wind-driven pollen. 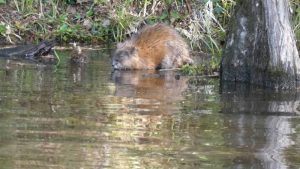 In spite of his back problems, the RiverGuard recorded this muskrat at the Nottoway River this past week. — Submitted | Jeff Turner

Lordy, Lordy, this trip started out so well. Got to base camp and had the boat just about unloaded when disaster hit me like a lightning bolt. I bent over to pick up my dry box and CRACK! WHACK! I heard a terrible sound, lost my vision for a second and dropped into the mud like one of those buildings you see being demolished on TV. I opened my eyes and knew my back had gone out again. Slipped disc.

After laying there a couple of minutes I tried getting up ,and of course it was pretty painful, but I could still get around so I continued to try to set up camp. Baaaad call. Within 30 minutes I could no longer walk.

So I called in Freezing Deer from work and alerted my dad that I was going to need an extraction team. I just couldn’t see myself crawling for the next three days. Then, to make things worse, and I guess because I was in so much pain and was not thinking straight over the next two hours, I kept changing my mind about leaving. One thing is I have a LOT of gear and I’m 6’4” 165 pounds that could not walk.

Freezing Deer got suited up, though, and was at the Hercules ramp when for the fourth time I decided it was going to be too difficult to get me out of there. I reasoned that possibly in three days I would be better and able to either get myself out of there, or at least assist at getting my broke self and all that gear home.

Luckily, I had lots of (legal) drugs that I started on. So max doses of Ibuprofen were the order and I believe that coupled with the fact I was not able to just lay around (in the woods stuff has to get done regardless) helped and by day three I was able to extricate myself from the river. It still took every bit of resolve I had to keep pushing, keep moving cause my body did not want to. People who know me know how much trouble I have getting around anyway, being partially paralyzed, so this was quite challenging to say the least.

Soooo, anyway, I didn’t do much that first day on the water. The second day I did get in the boat, figuring I could hurt in the boat as well as on shore. I did catch a few shad, but that was it. I did not cast for anything else, I just didn’t feel like it. Luckily, there was no trash to pick up either. I did remove three tangles of fishing line some ignorant moronic slime balls left in the trees along the shore, but that was about it.

Moonpie Critter Patrol yielded some beaver, muskrat, osprey, snakes, a goose and a cormorant, which I chased around for 30 minutes trying to get close enough to get a good pic of it running across the water to take off. I never achieved that and decided right then I hate taking wildlife photos!

So there you have it. As painful a trip as this was I still had a good time, and thanked the Good Lord for breaking … ahh, I mean bringing me back to the two rivers (I love so much) we call the Nottoway and Blackwater.

To contact Jeff about river issues, email him at blknotkpr@earthlink.net