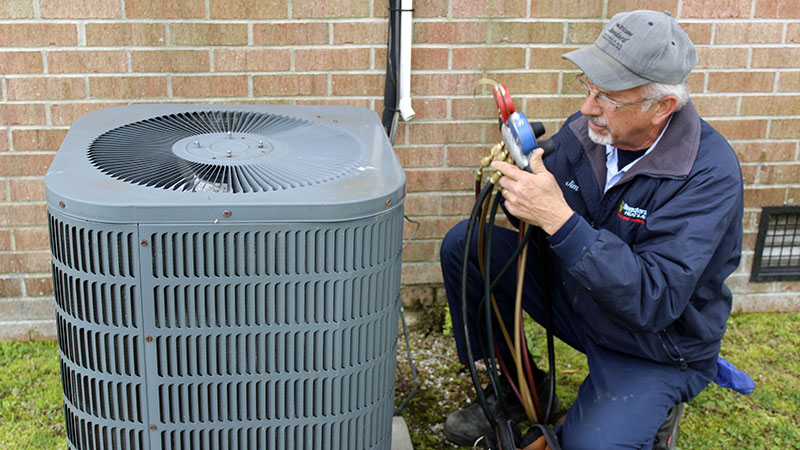 Jim Henderson of Henderson Heat and Air uses special equipment to measure the refrigerant level of this outside unit at Armanda Manley’s house in Franklin. Her home was one of three that the professional surveyed to help residents find issues that could have contributed to their high heating bills this past winter. -- Stephen H. Cowles | Tidewater News

FRANKLIN
The results of 105 complimentary energy audits and meter checks performed by the city of Franklin’s utility staff since Jan. 1 indicate that the extraordinarily high utility bills city residents received this winter were likely the result of inefficiencies in their homes’ heat sources, coupled with sub-freezing temperatures outside.

According to City Manager R. Randy Martin, 65 of the 105 homes evaluated had malfunctioning heat pumps, and as a result, most were reliant on electric heat strips. Another 11 were found to have baseboard electric strips in areas with little to no insulation. Baseboard heat, he explained, is the most expensive type of heat in terms of electricity usage. 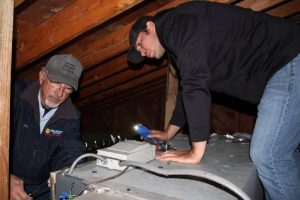 Jim Henderson, left, of Henderson Heat and Air, tightens the cover to the return duct of the air handler, which is located in Manley’s attic. Scott Henderson, his nephew, assists in the inspection.

Martin added that the city’s utility staff had also found that numerous customers had set their thermostats at 80 degrees or above during the winter months, which he said was another strong contributor to higher utility bills.

“One home had the heating coils [for the HVAC system] in an uninsulated closet,” he said. “The heat pump was having to work 10 times harder as it would have had it been in a heated or insulated area. Most heat pumps are located outside but have some inside equipment.”

He also confirmed that no meter malfunctions had been found. The meter checks, he said, included an examination of both the meter and the transponder that sends usage data to the city’s meter reading equipment.

“They found four meters where the ERT (transmitter) stopped working,” Martin said. “But that has no bearing on what their reading is, and what they’re charged.”

He added that when any sort of transmitter problem is discovered, the city’s utility department will send someone out to physically examine the meter.

“They don’t guess what it [the electric usage] is,” he said.

Another contributing factor to this winter’s high utility bills that Martin identified were problems with electric water heaters. He said that three homes were found to have hot water leaks, which were causing those homes to use more electricity.

Another two homes were found to have their water heater thermostats stuck in the home position, meaning they heated the water continuously rather than stopping when it reached a certain temperature, and as a result used more electricity.

To obtain an independent opinion on the energy efficiency of houses in Franklin, The Tidewater News enlisted the assistance of HVAC contractor Jim Henderson, owner of the Franklin-based firm Henderson Heat and Air, accompanying him to three different homes.

The first was the residence of Frances Sharp, who lives on a first-floor apartment on North High Street and received a utility bill for around $891 in February.

Henderson said that Sharp’s heat pump appeared to be operating at normal capacity, but had been relying heavily on electric heat strips during the period of colder temperatures. He also mentioned that the air handler for the HVAC system had been installed inside of a closet with a restrictive louvered door and no return duct. The supply duct in the crawl space under the home, he said, was in average condition visually but was likely installed for the previous oil furnace, which can sometimes be inadequate for heat pump application.

“Although the duct is insulated, it may be leaking at the seams and duct joints,” Henderson said. “I found one flex branch duct to a floor diffuser disconnected in the crawl space. Most of the foundation vents are not closed fully and the access door to the crawl space is open, allowing cold air to flow in.

“The crawl space is also open to the front porch, which has deck-style flooring. Insulation under the flooring is missing in places, which adds to the heating load in an existing cold crawl space.”

Sharp was appreciative of Henderson’s efforts, but still questioned the accuracy of the utility bills she had received from the city. She explained that she had made a $300 payment on her $891 February bill on March 1 and produced a receipt showing the remaining balance as $591. She then produced the utility bill she had received in March, which stated that she had a previous balance of $606 due and current charges of $401, plus a late fee of $13.38.

No previous balance had been listed on the $891 bill she had received in February.

Sharp later said that when she had gone to the city’s billing department to discuss the discrepancy, the billing staff had admitted that the error was on their part and corrected her bill to accurately reflect her earlier payment.

The next home evaluated was a suburban-style two-story home located on Kings Lane belonging to Antonio Parham. Parham said his February utility bill was for $1,304. Parham’s home has two separate heat pump units, one for the first floor and the other for the second.

Henderson said that the first floor heat pump was found to be low on refrigerant charge and relying mostly on the supplemental electric heat strips as a result. However, the second floor system was operating normally.

The third house that Henderson evaluated was the residence of Armanda Manley, who lives in a one-story home on Madison Street. As with the Parham house, Henderson found that Manley’s outside unit was also low on refrigerant. That means the equipment is not able to build up enough capacity to take care of the house.

“Leaks can happen anytime,” added Henderson. “It was probably a slow leak. The leak(s) need to be located and repaired and the refrigerant fully charged. After which, it should work fine.”

In the attic, he found the cover on the return duct was not secured properly to the air handler, so it was pulling in cold air there as well during the winter.

Henderson advised that people should check their units at least once a year; twice is recommended. Otherwise, it can cost them a lot more money in the long run.

STEPHEN H. COWLES, staff writer, contributed to this story. Contact him at stephen.cowles@tidewaternews.com.