Miss Elizabeth Rainey Esfahani and Mr. Robert Haven Willey III were united in marriage on Saturday, July 8, 2017, at five o’clock in the afternoon in the garden of the San Ysidro Ranch in Santa Barbara, California. 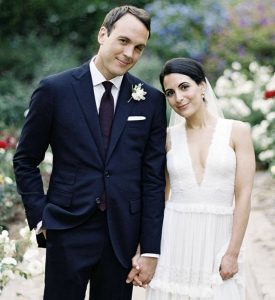 The wedding was officiated by Carey Willey Sims, sister of the groom and Collegiate Minister at Mary Washington University.

Presented in marriage by her parents and escorted by her father, the bride wore a gown designed by Zuhair Murad. Serving the bride as her matron of honor was her sister, Sarah E. Tringhese of Houston. Her three nieces were flower girls: Ella Rainey Tringhese, Catherine Gwinn Tringhese and Ellen Ida Rainey Esfahani.

The bride is a graduate of the St. John’s School in Houston and of Georgetown University. She received an MA in communications from the University of Texas at Austin and an MA from the John’s Hopkins School for Advanced International Studies. She was a business writer for Time Inc. and later the press secretary to the Financial Services Committee of Congress. She is the director of Development for Matt Camron Inc. in Houston.

He worked as a food and travel writer for publications such as Esquire, Food and Wine and Details magazines as well as The New York Times.

He is the owner of the Galerie Novella, a 20th century design gallery in Houston.

Following a honeymoon to Provence and Corsica, the couple are residing in Houston.

Following the ceremony, the parents of the bride hosted a dinner reception in the wine cellar and garden of the San Ysidro Ranch.

On the eve of the wedding, the groom’s parents hosted a dinner at a private home in Santa Barbara.