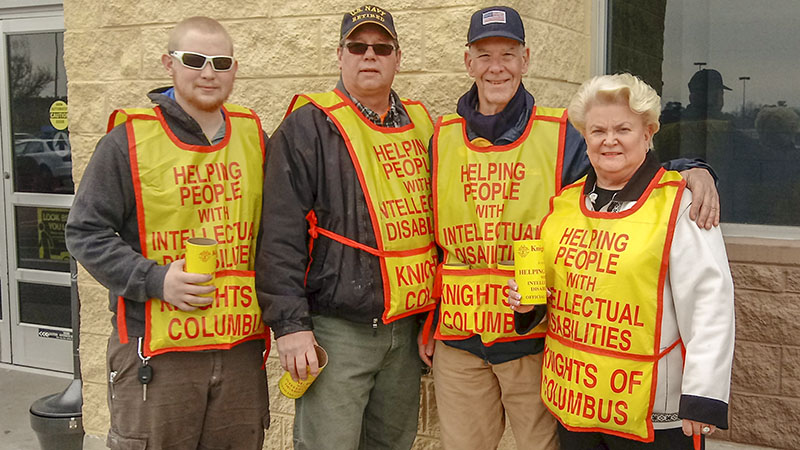 FRANKLIN
On March 24, for the 16th consecutive year, the Knights of Columbus and members of St. Jude Catholic Church in Franklin accepted donations outside the Franklin Walmart for the KOVAR program — a charity that provides support for Virginians with intellectual disabilities. This year, the donations received at Walmart, combined with those received from parishioners at St. Jude and the Shrine of the Infant of Prague Catholic Church in Wakefield totaled over $2,400.

To date, the KOVAR program has provided over $1.45 million to organizations and group homes in the commonwealth and over $2.5 million in interest-free loans to organizations building or improving their facilities. In the Western Tidewater area, the program has extensively supported The Children’s Center of Franklin, Zuni Presbyterian Homes, the Western Tidewater Community Association, Graz’n Acres Riding Center of Sedley, and Sussex-Greensville-Emporia Adult Activity Services. It is also the largest supported of Western Tidewater’s local Special Olympics.

“The Knights are very grateful to everyone in our community for their personal generosity and to the Walmart of Franklin management for their organizational support,” said Dan Hohman, a longtime Knight and the chairman of the KOVAR drive. “Walmart has been very good to us here in Franklin for a long time. We’ve been able to raise a lot of money here every year.”

All administrative costs are borne by the Knights of Columbus so all contributions go directly to the disadvantaged. KOVAR’s main goal is to make the lives of those with intellectual disabilities and who live in group homes as much like the lives of everyone else in the community as possible, Hohman said. An example of KOVAR’s local efforts that Hohman mentioned was when the organization provided vehicles to Zuni Presbyterian Homes (now closed) to transport the people who lived there to and from work every day.

KOVAR has been incorporated since 1971.