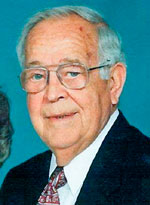 He is survived by his wife of 65 years, Bertha; his children, Becky Owens (Mark) of Columbus, Ohio; Janice Harper of Suffolk, Virginia; Susan Francis (Joey) of Franklin, Virginia; Robert Harper Jr. (Mary) of Broad Run, Virginia; six grandchildren, Elizabeth Epstein (Ethan,) Ashley Moody (Spencer,) Grace Francis, Ben Francis, Robbie Harper and Catie Harper; and a great-granddaughter, Adara Epstein.
He is also survived by a sister, Laura James Whitlock, and many nieces and nephews.
He was predeceased by his parents, Willie Jackson Harper and Robbie Fittz Harper, and a brother, Morris Fittz Harper.
He was veteran of the Army and retired from Allied Signal after a long career in the textile industry.
Aside from his family, one of his passions in life was clock repair. He spent over 65 years building, collecting and repairing clocks.
Farrar Funeral Home South Hill is handling arrangements.
The graveside service will be on Friday, April 13, at 1 p.m., in Crestview Memorial Park, LaCrosse, Virginia.
In lieu of flowers, donations may be made to the Southside Rescue Squad, South Hill, of which Buddy was a charter member.
Condolences may be registered at FarrarFuneralHome.net.