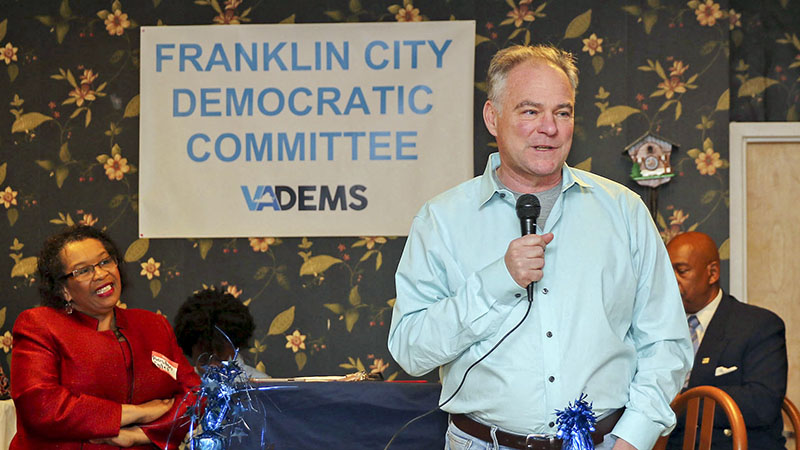 FRANKLIN
The Franklin Democratic Party sponsored a Meet & Greet for Sen. Tim Kaine (D-Va.) in the Franklin Seafood & Steak House on Saturday. Ricky Sykes, president of the organization, opened the event with words of welcome and the introduction of the owners of the business, Clyde and Wydia Bailey, who served as the hosts.

Because of an engagement in the Petersburg area Kaine was running late, so Sykes had various other people to speak. Del. Roslyn Tyler (D-75) of the Virginia House of Delegates addressed the audience in reference about the real reason for the agenda today. That was to make sure that Kaine gets re-elected. She added that it is always good when a senator takes the time to come down to our area. She strongly feels that Kaine is a person who is very concerned about others.

Once Kaine arrived he was introduced by Tyler. As Kaine began his talk he stated that his first involvement in politics was as a city councilman in Richmond some 24 years ago. Kaine also spoke about the challenges of being a councilman. Unlike other political positions, a city councilman does not get a break. This statement was addressed to Sykes and Franklin City Councilman Greg McLemore, who is running for re-election.

Kaine opened his remarks by first thanking Tyler for her role in the Virginia House of Delegates more especially when he was governor of Virginia and the role that she played in health care. He then went on to talk about life in the senate and why he was so excited to be running for re-election.

“First, life in the senate — I really enjoy it,” he said, but added it is a job that gets him frustrated. “There are challenges, especially at this time with this president.” The senator added that he is a patriotic person who “can work with any president on anything that is good for the country and the Commonwealth. But there are too many situations that this president seeks to divide us. A president should be trying to bring people together and not dividing. He always wants to pick a fight with someone.”

As a member of the Armed Forces and Foreign Relations committees, Kaine said he wants a president that keeps the military strong. But he has problems with the recent cuts in positions by this president and in cuts that he has made in the budget.

He also spoke about the Affordable Care Act and the need to do more. Too many people still do not have health insurance because cost/premiums are still too high as well as prescription drug cost. As a member of the Health and Education Committee he is promoting a new plan that he developed called Medicare X that would give people more choices and be more affordable.

Finally in the area of education he is concerned about making sure that college is more assessable, but it shouldn’t be just about college students. His concern is in positions that educate those that are interested in trade and technical positions.

Kaine is proud of Virginia, although when he was on the ticket with Hillary Clinton they didn’t win but they did win Virginia. He commented about recent wins by Democrats not only in Virginia, but also nationwide. He is going to kick off his 2018 bid for re-election using a slogan, “A Virginia that works for All.”

After closing his remarks, the senator thanked those in attendance and asked for their support. He then received many questions from the audience.