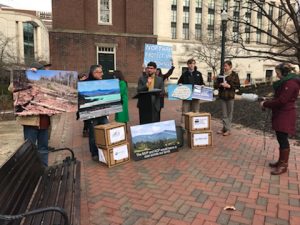 One petition, signed by 10,000 Virginian residents, demands that the Northam administration immediately halt the tree-felling along the pipeline routes and let the public comment on the companies’ plans to control erosion and stormwater before they are finalized by the Virginia Department of Environmental Quality.

Activists also gave Northam an online petition signed by more than 62,000 citizens from around the country calling on Northam to stop the pipelines, which they said would threaten the Blue Ridge Parkway, the Appalachian Trail and miles of national forest land. By late Tuesday, the number of signatures on the Change.org petition had topped 65,500.

The Chesapeake Climate Action Network, the Virginia chapter of the Sierra Club and other groups held a press conference on the state Capitol grounds the morning after the DEQ approved the Mountain Valley Pipeline.

Outraged by that action, the environmentalists said the DEQ must require the companies to take better precautions when constructing the pipelines. The activists said that will happen only if Northam gets involved.

“It’s time for you to be the leader that we voted for,” LeeAnne Williams, a Virginia Sierra Club volunteer, said, addressing the governor.

Some activists said they have already seen negative effects of the pipeline from the cutting of trees. “The proposed pipelines have altered people’s lives, land value and emotional well-being,” said Lara Mack, Virginia field organizer for Appalachian Voices.

If built as proposed, the pipelines would cross streams and other bodies of water more than 1,400 times, environmentalists say.

David Sligh, conservation director for Wild Virginia, said the state should review the environmental impact at each of those water crossings. He said pollution from the pipeline could cause “permanent damage to the aquatic systems.”

The companies that want to build the pipelines say the projects are crucial to meeting the energy needs of Virginia and the mid-Atlantic region.

“Demand for natural gas is growing across the region – to produce cleaner electricity and support economic development — but there is not enough infrastructure to deliver the supplies needed to meet this demand,” the consortium that has proposed the Atlantic Coast Pipeline says on its website.

The consortium, which includes Dominion Energy, says the pipeline construction would create 17,000 jobs and provide a “major boost to local businesses in every community.”

In a recent monthly newsletter, the company building the Mountain Valley Pipeline said it plans to have the pipeline in service by the end of the year.