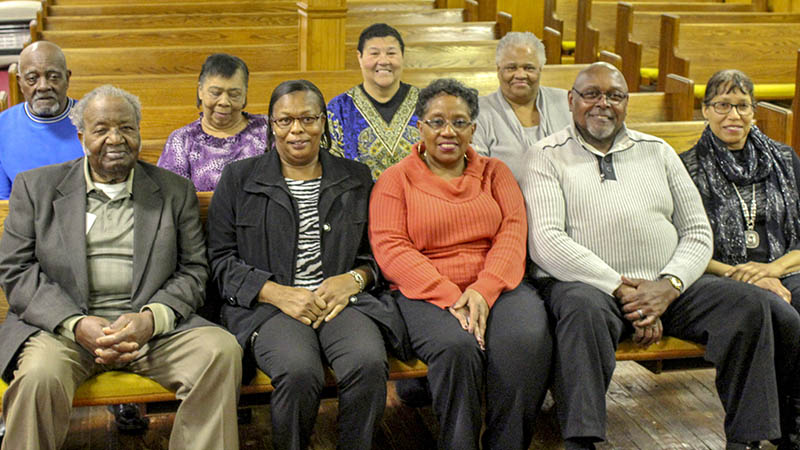 FRANKLIN
The congregation of O’Berry African Methodist Episcopal Zion is not waiting for some special number to celebrate its church anniversary. Anyway, what’s in a number?

Team O’Berry has already been formed and is active in plans to observe the 162nd year of congregations past and present worshipping their Lord. The celebration is scheduled for the weekend of May 25-27.

Added to that is the writing and publishing of a genealogy of members and church history, some of which team members recently shared.

Earva Sumblin, a committee member, said O’Berry AME got its start in 1856 as a bush harbor, also known as a brush arbor or even hush harbor. That is, people conducted services outdoors, often secretly if they were slaves. Irvin Story is credited as the founder, she said, and four years later a brick-and-mortar structure was built for Christians to worship more comfortably and freely. Initially, the site was referred to as the O’Berry Colored Church. But after later aligning itself with a church in Harlem, New York, it became a member of the AME Zion family of churches.

Church and committee member Otis Brown said there aren’t a lot of older members left to talk to about the church decades ago, though he noted that many of the existing families are intertwined through marriages.

Candice Woodruff, church clerk and Sunday School teacher, added that much of what is known has been handed down “word of mouth” by grandparents such as hers. Part of the team research is determining exactly how the church got its present name. She thinks that it came from a family of that name that owned or deeded the land.

Her husband, Reginald Woodruff Sr., said he was not born into the church. He married into it, converting from being a member of East End Baptist in Suffolk. Now he can’t imagine belonging anywhere else.

“It’s (the spirit) is addictive,” said Woodruff. “I fell in love with the place.”

O’Berry’s church population had progressed to the point where four other churches “sprung off,” as Sumblin put it: St. Luke in Franklin, David Temple, Beulah Land in Ivor and St. Mary’s in Sebrell.

All of the committee members recalled going to the two-room O’Berry School opposite the church when they were children. They also remembered the barter stores owned by Frank and Edgar Blythe, the latter of which stood where a car wash is located in the Hunterdale section of Franklin.

Ruth Whitehead said she’s attended O’Berry all of her 57 years of life. One of her earliest memories was, in fact, going to church with her parents, siblings and relatives, one of whom was her grandfather, Garfield Benn.

Ann Ellison laughed with other team members when she recalled that as a child she would cry because she didn’t want to go to church.

Sumblin remembered having to walk to O’Berry from the family home on Joyners Bridge Road.

Today, the congregation of approximately 67 people is led by the Rev. Dale Seaborne; the Rev. Carrie Seaborne is the first lady of the church, and the couple has been at O’Berry for 10 years.

The committee calls them “wonderful and dedicated people.”

The formal “Evening of Enchantment” is scheduled for 6 to 10 p.m. on Friday, May 25, at the Main Event in downtown Franklin. Steve Alexander will be the guest comedian for the occasion. Reservations should be made by Monday, April 30. A guest speaker has been invited for the 3 p.m. service on Sunday, May 27.