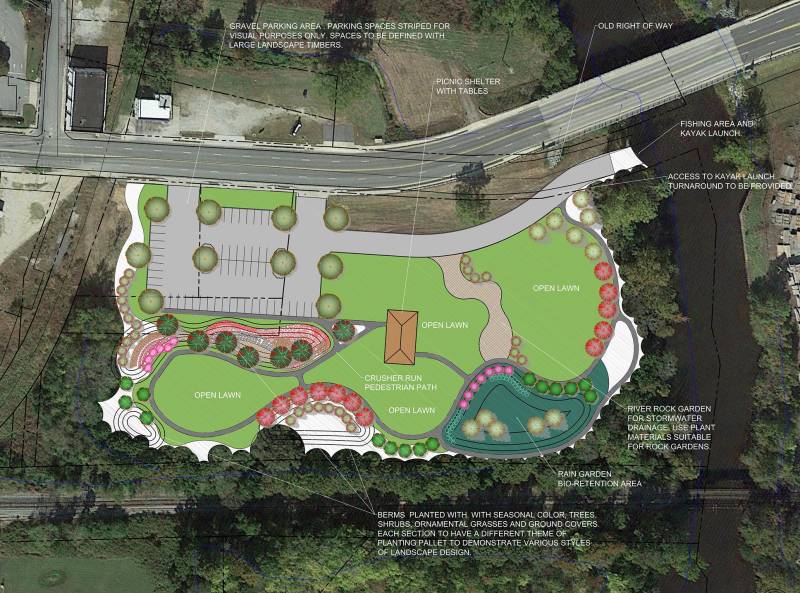 This is a concept plan for the Franklin Arboretum Park Riverview by the Second Avenue Bridge for Franklin. -- Courtesy | Kimley Horn

FRANKLIN
The effort to beautify and revitalize downtown Franklin has just been made more than a little easier, thanks to a major contribution from International Paper. The company has announced it has completed the donation of 15 acres of land, which will enable the development of a park alongside the Blackwater River and also bordered by Second Avenue and the bridge.

The Riverwalk project has long been an idea to generate new interest in downtown. Franklin City Manager Randy Martin said a similar concept actually goes back to the time of the 1999 flood. But that idea was put on the proverbial shelf and had gathered dust until recently.

The donated land goes along the river to Barrett’s Landing, and the space touches the Civil War trails, gazebo and concert lawn, public boat landing and visitor’s center. Though owned and operated by the City, the area was originally given by IP earlier in the mid-1990s, according to Jenny Dixon, mill communications manager. She added that the new donation expands that successful project.

Referring to the Blackwater River as an attractive but under-used asset, Dixon said the sizable project will enable both residents and businesses of the city, Southampton County and the southern part of Isle of Wight County to take advantage of outdoor recreation. At the same time, it will bring attention to businesses and restaurants.

In her statement to The Tidewater News, Dixon said about six acres of the property will be used to develop a recreational space that will offer a Riverwalk Trail system, fishing area, kayak/canoe/paddleboard launch, outdoor classroom for nature observation, greenspace offering unstructured play, botanical arboretum and a family picnic pavilion. She added that the project includes an effort to protect water quality with permanent vegetated riparian buffers along the river and wetlands.

“Promoting our natural capital by providing educational opportunities to learn about the local ecology and IP’s sustainability efforts is a great example of how we create long-term value for International Paper, our community and our stakeholders for generations to come,” said Dixon. “This donation embodies the spirit of The IP Way Forward and our commitment to mobilizing our people, products and resources to address critical needs in the communities where we live and work.”

“The Riverwalk Project will make it easier for families to have access to safe and balanced recreation while encouraging healthy and active lifestyles,” she continued. “We are proud to collaborate on another meaningful project with the City of Franklin and look forward to seeing it come together.”

Dixon added that the City has gotten a $45,500 Virginia Land Conservation Foundation grant to help with the land acquisition. These grants are used by private land trusts, local governments and state agencies to acquire and protect significant lands for use as agriculture, forestry, historic resources, natural areas, parks and open space. Jamie Craig with Beechtree Group helped secure the grant.

“The City of Franklin appreciates the continued cooperation, collaboration and sense of community provided by our friends at International Paper,” said Mayor Frank Rabil. “We are grateful for their generosity and for the lasting positive impact this donation will have on our city.”

That’s an appreciation also shared by Martin, who looks forward to the City pursuing funds for actual development of the property. Franklin will seek private donations and partners with a vested interest in wellness and health to promote outdoor activity.

There has already been some expressed interest, but no commitments yet, he said. Of course the City will apply for additional state aid.

Martin foresees the project being done in phases, and is hopeful that will begin next fiscal year with funding and more definite plans in place. Ultimately, he said, the park could be expanded to Barrett’s Landing, the boat landing and even to an area beyond formerly known as ‘Pinpoint.’

Martin commended the city staff for its work in this project so far, particularly Beth Lewis, deputy director of Community Development for the city and county.

He said Lewis did “a fabulous job” of doing the work pertaining to the project, including the extensive applications. Director Donald Goodwin and City Attorney H. Williams Taylor IV were also thanked as being instrumental for “getting all the property things worked out.”

Other community members heavily involved with the City and downtown expressed their gratitude and hopes for the land’s development into a park.

Teresa Beale, executive director of the Franklin-Southampton Chamber of Commerce, said, “This is indeed exciting news for our entire community! By utilizing the river and natural resources in a unique way this property will enhance our quality of life. The welcoming gateway will draw visitors into the City as well as attract new businesses to locate nearby. IP’s generous donation will be enjoyed by many generations to come.”

Dan Howe, executive director of the Downtown Franklin Association, said, “We’re very grateful to IP and other property owners for their foresight to donate this land.”

Of the park idea, Howe added, “I think it’s another wonderful initiative to beautify our historic downtown, particularly our eastern gateway. [The Riverwalk would] continue our revitalization and beautification of our downtown district and add another wonderful amenity to our community.”

Howe also hopes that the park will one day connect to the Barrett’s Landing Boardwalk.

He mentioned that a more immediate way to further improve the aesthetics in the area is the mural that’s planned to be painted sometime this spring on east side of the Park and Shop.

Amanda Jarratt, president and CEO of the Franklin-Southampton Economic Development Inc., said of the Riverwalk project, “I think it’s going to be a spark that really sets off further revitalization. It’s really going to improve the aesthetics of the entrance to the city.”

She foresees the park will offer “passive recreation that is seriously needed in the city now.” By that, Jarratt meant it can be a place for people to throw a Frisbee or have a picnic or just walk around, rather than be dedicated for a specific activity such as basketball.

“I think this donation further strengthens the collaboration and partnership between IP and the city of Franklin,” said Jarratt.