Chowan University Hawks go down to Falcons of St. Augustine’s 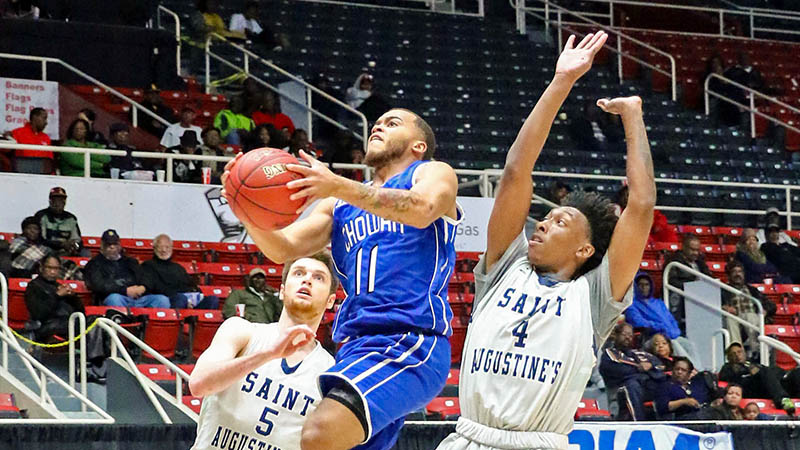 Gus Rowland takes it to the hoop. -- Frank A. Davis | Tidewater News

CHARLOTTE, N.C.
The Chowan University Hawks entered into the opening rounds of the Central Intercollegiate Athletic Association Basketball Tournament at Bojangles Coliseum in Charlotte, North Carolina, in a game played on Tuesday. The Hawks — seeded No. 5 in the northern division of the CIAA — were pitted against the No. 4 seeded Saint Augustine’s Falcons of the southern division of the CIAA.

In the opening minutes of the first half the Hawks held a 3-8 lead following a jumper by Demetrius Sanders. But by the 12:20 mark, the Hawks saw their last tie and lead end with the score 12 all. The Falcons pushed their lead to 39-21 by the end of the first half.

Continuing play after the half the Hawks closed the score to their closest point of the half following a three-point basket by Brandon Mayhan with a score of 47-53. From that point the Falcons went on to control play for the remainder of the game to claim an easy 75-55 win.

In scoring for the Hawks, they were led by Demetrius Sanders with 11 points, followed by Dino Muminovic with 10 points. 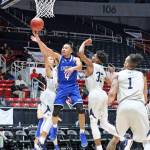 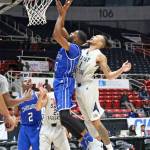 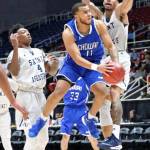 Driving to the hoop Gus Rowland 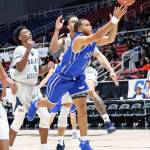