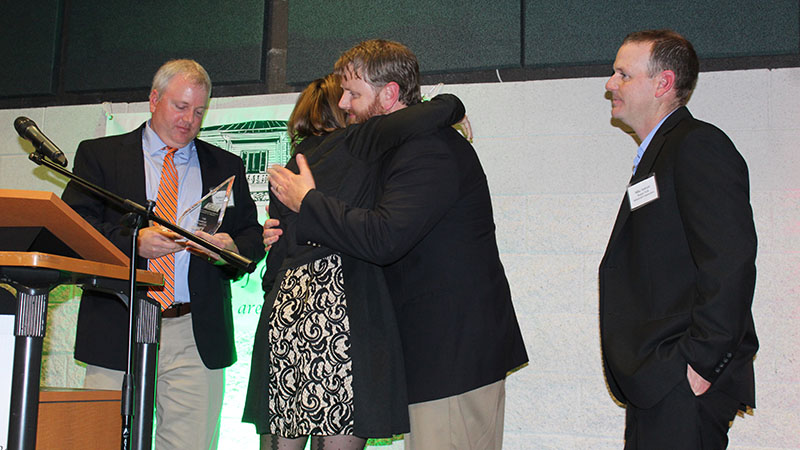 Franklin-Southampton Area Chamber of Commerce President Pam Lease hugs Craig Sawyer of Repair Tech, which was honored on Thursday at Business of the Year. With them are his brothers, Nathan, left, and Mike, who all own the industrial contracting firm. -- Stephen H. Cowles | Tidewater News

FRANKLIN
Repair Tech was honored as the 2017 Business of the Year by the Franklin-Southampton Area Chamber of Commerce on Thursday night. The industrial contracting firm, located on Carrsville Highway, was started in May 1999, and is owned by brothers Craig, Mike and Nathan Sawyer. Kim Marks, left, receives the gavel of the presidency for 2018, from Pam Lease, who served as the chamber board leader this past year. — Stephen H. Cowles | Tidewater News

The ceremony to laud the business took place during the Chamber’s 64th annual meeting, which was in the Regional Workforce Development Center of Paul D. Camp Community College.

Standing with his brothers, Nathan Sawyer described the recognition as “surreal in a sense …it’s hard to take in.”

“We really have to thank a lot of people. For 18 years, the City of Franklin has been good to us, It’s nice to see our achievements and growth have not gone unnoticed,” Sawyer said. “Being named ‘Business of the Year’ is special to us.”

With his brothers, Craig and Mike standing beside him, Sawyer said the company’s work is “never a 9-5 job.” He went on to commend the employees, and noted that the trophy was “a symbol of what they accomplished. This is about them, not us.”

In addition to the work of servicing chemical facilities, paper mills, power plants and other construction fields, Repair Tech has been a generous supporter of high school athletic programs as well as The Children’s Center and Cancer Care Foundation.

Sponsors of the award were Solenis, Eastman and Arkema.

The evening was not have been complete without recognition of the man who made the Chamber possible decades ago: Sol Waite Rawls Jr., who had died on Jan. 28.

Southampton County Administrator Mike Johnson listed a handful of examples of the Franklin resident’s contributions, including not only the Chamber,  but also Southampton Memorial Hospital, the Village at Wood’s Edge, the YMCA and Paul D. Camp Community College.

Johnson described Rawls as a modest who shunned recognition. During his life, Rawls reportedly once turned down a program to honor him.

“He was a man whose true legacy was selfless community service,” said Johnson, who went on to say that Rawls was someone who uplifted others; he was bridge builder, citing his work after the 1999 flood and “a friend to man.”

Pam Lease, who had served as Chamber board president for the year, presented the gavel to the new leader, Kim Marks, who is CEO of Southampton Memorial Hospital.