FRANKLIN
Franklin City Council and the Southampton County Board of Supervisors met on Wednesday evening to continue discussion about the possibility of consolidating water and sewer systems, an idea that’s been swirling about since 2012. More specifically, the governing bodies and public who attended were presented a rate study from Municipal and Financial Services Group representatives President Ed Donahue and Senior Manager Mike Maker. 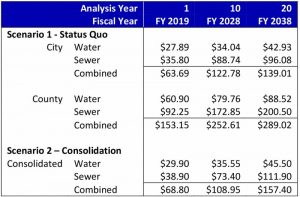 Presuming an average of 4,000 gallons of monthly usage, this chart gives a sample comparison of water, sewer and combined monthly bills under both the status quo and consolidated scenarios. — Courtesy | MFSG

This project dates to November 2012 when both the City and County created a Memorandum of Understanding to “formally and officially establish a shared commitment to explore, evaluate and implement shared services opportunities to improve services, enhance efficiency and save money.”

The MOU included three reasons for the idea: To improve services for residents’ needs; obtain a better economic value and savings for taxpayers; and both improve and increase operational efficiencies.

In September 2015, the Timmons Group, Davenport and Co. and McGuire Woods were commissioned to do a feasibility study of shared water and wastewater utility services. The recommendation then was to consolidate assets and form a Public Service Authority that would have representation from Franklin and Southampton. Further, a third party that’s not worked for either localities should do an asset valuation.

In March 2017, WetCon and MFSG were picked for such a study. The former did a valuation model, and the latter came up with a financial framework and a plan for equalizing water/sewer rates.

Donahue thanked both City and County representatives for being “extremely cooperative,” and then deferred to Maker, “who did most of the heavy listing,” to review the study findings with those present.

A couple of scenarios were constructed:

• The first is to maintain the separate utilities. The advantage being no changes, but a disadvantage is that “natural” service areas aren’t the same as political boundaries.

• The second is to consolidate City and County utilities. The advantages include minimizing a need for excess capacity and it’ll be the least expensive option for the region over time. A disadvantage is that shared resources and costs benefit smaller partners more than larger ones.

Of note is that the city’s wastewater treatment plant is located in a flood plain and has experienced flooding in the past, and is quite likely to happen again.

For those reasons, getting a permit for expansion could be difficulty, but even if granted, a new site might be required. There are also challenges environmental and financial.

Finally, Maker came to what Donahue earlier said was going to be on everyone’s mind: “What is going to cost me? That’s what people are going to ask.”

MFSG’s recommendation is “We think it’s a good idea regionally in the long term,” said Maker. To which Donahue added, “It makes sense long term.”

Franklin City Manager Randy Martin said the next step will be to do further evaluation, such as how to set up the mechanics and develop “a very tight timeline with the goal to complete the decision-making process within the next 18 months.”

He added, “The sooner we can make a decision, the quicker we can get relief to customers before — heaven forbid — another event sets us a back. We’re a year behind from where we want to be.”