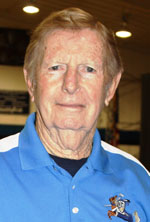 Born in Monroe, Louisiana, on June 11, 1928, to the late Henry and Helen Easterling, and raised in Pine Bluff, Arkansas, he was preceded in death by his son, David F. Easterling Jr.

David Sr. served in the Army as a paratrooper from 1946-47 during the occupation of Japan, after which he enrolled in Texas Christian University in Ft. Worth, Texas, in 1948. In 1950 he was “called up” for service once again for the Korean War.

Returning to T.C.U. in 1952 and graduating in 1953, David received his college degree and began a 34-year career of teaching high school and a legendary career in coaching football and baseball in Texas. During his tenure he won the 1974 State Championship for South Grand Prairie High School in baseball.

After retiring, David moved to Southampton County, Virginia, where he came “out of retirement” to coach football and baseball at Southampton Academy for 10 years, where he assisted in winning two State Football and two State Baseball championships. He also volunteered in coaching little league baseball.

During his lifetime Coach “E,” as he was affectionately called by his players, influenced countless young men in athletics, character, and integrity. He paced the sidelines, his hand on a young man’s shoulder telling him what he expected him to do on the field. With his quick wit, great one-liners, and boundless spirit, he was a friend to everyone that knew him. He was an avid TCU Horned Frog, Dallas Cowboys and Texas Rangers fan, a lifelong South Grand Prairie Warrior and a Southampton Academy Raider.

He was a member of Capron United Methodist Church, where he taught the men’s Sunday school class and sang in the church choir. He was a member of the Capron Ruritan Club. He also had a love and compassion for animals.

Viewing will be at Wright Funeral Home in Franklin from 9 a.m. to 5 p.m. on Wednesday and Thursday.

The funeral will be at 11 a.m. on Friday, March 2, in Capron United Methodist Church. The burial will be held at the Dallas Fort Worth National Cemetery, Dallas, Texas, at a later date.