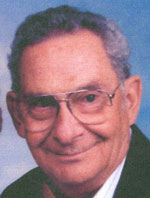 Calvin was born in Wilkes County, North Carolina, and grew up in Virginia Beach. He was the son of the late Harley Smith Sanders Sr. and Isa Lola Beaty Sanders, and was a 1955 graduate of Princess Anne High School.

Calvin was a retired Master Chief after 30 years of service in the Coast Guard, and was a Vietnam veteran.

Left to cherish his memory are his wife of 60 years, Joyce McCloud Sanders; a son, Calvin B. Sanders Jr. of Suffolk; two granddaughters Shelby and Rachel Sanders; and his beloved dog, Tara.

At Calvin’s request, his body was donated to the Virginia State Anatomical Program.

The family suggests memorials be made to the Carrsville Volunteer Fire Department or a favorite charity.