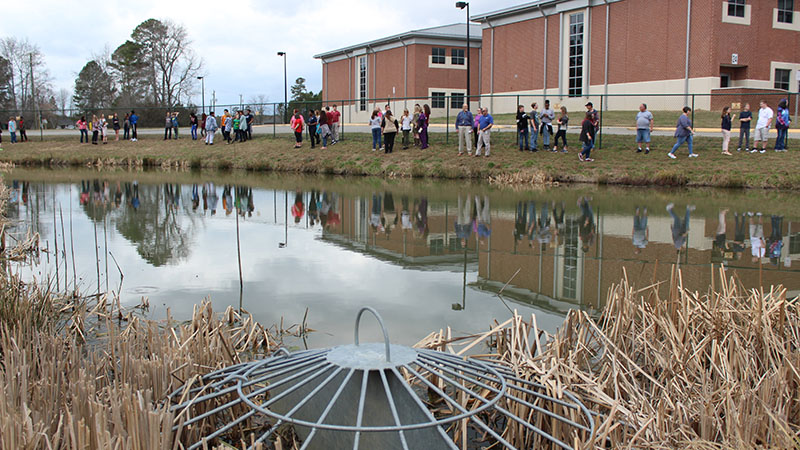 WINDSOR
Isle of Wight County Schools hosted a ribbon cutting and dedication ceremony for a stormwater retention pond on the campus of Georgie D. Tyler Middle School last Friday. The pond, while constructed at the same time as the school, was the focus of a recently completed seventh grade life sciences project in which students identified and researched life forms inhabiting the area.

According to GTMS science teacher Kyle Barnes, who led the project with fellow teacher Cynthia Ballinger, he got the idea for the assignment while walking by the pond as he was leaving the school on the last day of classes this past June.

“I looked at the pond and thought it was a great ecological system and how it could be used to aid in the teaching of seventh grade students that take life science,” Barnes said. “After getting all the clearances, we thought about what SOLs could be taught through project-based learning and be used in the future expo for parents to see their work.”

Specifically, Barnes’ goal was for students to identify living (biotic) and non-living (abiotic) factors of the ecosystem.

“We wanted the children to know the differences between eukaryote, prokaryote, multicellular, unicellular, autotroph and heterotroph,” he added. “It started with a walk around the pond to see what was actually in the pond. Later, we went out with school-issued iPads and took pictures of everything we could see because the students didn’t know exactly what they were going to research.

“After a lot of discussion in their groups, the individual groups, 29 in five classes, came up with what they wanted to research and learn more about. After research, a short paper and developing a PowerPoint slide with specific information, it was time to go to the laser cutter.”

As their final task relating to the retention pond project, each of the 29 groups of students was given an 8-inch by 10-inch wooden board on which to make a plaque about their species living in or near the pond, or one of the non-living factors of the environment. Students laser-etched a depiction of their life form or environmental factor and a brief paragraph detailing their research onto the board.

The board were then stained so that they would hold up outdoors and mounted on the fence surrounding the pond.

“The students have a much better understanding of the pond and what is living and non-living that makes up the entire pond,” Barnes said. “There is much more that can be done with the pond and so much more the students can learn from this very fun process.”

The retention pond was designed and put in place in the early 2010s, coinciding with the building of the middle school, to catch runoff water resulting from the large footprint of the new school and its parking lots. The water collected in the pond ultimately drains into the Chesapeake Bay.