Broncos go down fighting in overtime, 68-65 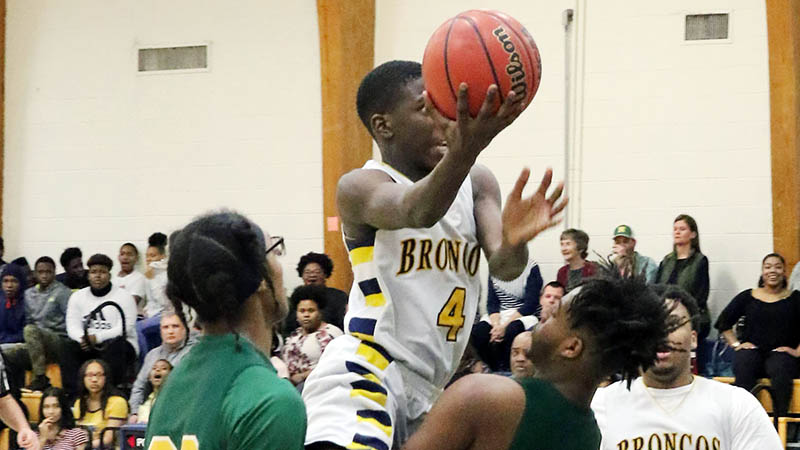 Nyjey Pope lays one up for the Broncos. -- Frank A. Davis | Tidewater News

FRANKLIN
The yellow brick road to the final state tournament in Richmond ended in the Peggy Wilkins Gym at Franklin High School on Thursday for the Franklin Broncos. They played to the best of their ability against the Northumberland High School Indians, but lost 68-65 in overtime in a hard-fought game for the Region 1A semi-finals.

In the second quarter the Broncos cranked up the offense to begin to getting back into the game. With 3:42 remaining in the half they had cut it to 17-27. A 3-point basket by Dajon Frazier cut the Indians’ lead to 22-29 at the 2:14 mark in the quarter. Deuntae Jefferson scored on a 3-point play, and then added a layup to close the half with the home team down one point with the score 32-31.

Continuing the physical battle after the half, Dreyln Ford put the home team ahead on a 2-point basket 36-35 at the 4:50 mark on the clock. The Indians on a 3-point play went back ahead 38-36. A tip in by Nyjey Pope tied the score again at 38 all with 2:36 left on the clock. With under a minute to play in the third quarter, two baskets by Jefferson put the home team ahead 44–41 at the end.

Entering the final quarter of play the two teams continued to tie and change leads. At the 3:07 mark the Indians had their biggest lead with a score of 57-52. But at 1:35, Bryan Powell for the Broncos connected on two free throws to tie the score at 59 all. After an Indian turnover the Broncos got the ball back with 1:10 remaining to be played. The Broncos froze the ball until 14:4 left on the clock when they called for a time out. The final attempt to win the game failed for the Broncos and the game went into 4:00 overtime.

Jefferson connected on two different fouls to drop in four free-throws to put the Broncos ahead 63-59 with 2:57 left to play. After getting the ball back, the Broncos went into another freeze, but lost the ball at 1:43. The Indians were successful in scoring a 3-point basket to cut the score to 63-62. Jefferson scored again for the Broncos to put them up 65-62 with 1:04 remaining to be played. The Indians on their next possession connected on a 3-point basket to tie the score at 65 all. A Bronco turnover resulted in another 3-point basket by the Indians to advance the score to 68-65 with 8.8 left on the clock. The Broncos last shot to tie the game missed the mark as the buzzer sounded to end the game and the season for the Broncos.

In scoring, the Broncos had two players in double figures. They were Drelyn Ford with 24 points and Deuntae Jefferson with 23 points.

The Indians were led by D. Palmer with 17 points, followed by C. Kich with 16 points, J. Tarleton 15 points and K. Thomas with 12 points.

Bronco head coach Robby Cutchins said after the game, “I am just so proud of my guys. I mean at the end of the day we fought, we showed resiliency throughout the year. We had some huge wins through out the year — 3A Park View, 2A Greensville and a big win against Southampton down the stretch. We battled in the quarterfinals against Colonial Beach who had an opportunity to lay down that game, but the boys keep fighting and fighting and got back in it and took control and picked up a huge win.

“And coming in tonight against a really, really good Northumberland basketball team and fall behind 20-7 out of the gate. But they keep fighting and believing in themselves. It’s just a hard one to swallow because you just knew that the victory was on the other side. But our young men are winning not only in basketball, but also they are winning in life. And that is the word that I left with them tonight. You got 10 out of 14 guys on this roster that have over a 3.0 grade point average. These guys are going to do great things and they are going to be good citizens. And at the end of the day I want them to win at life and there are some good things to come and I look forward to it. ” 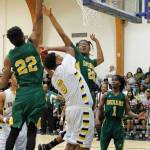 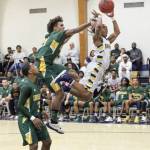 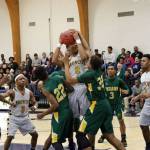 Dreyln Ford draws a crowd and foul on shot