Broncos’ win advances them in Region 1A Tournament 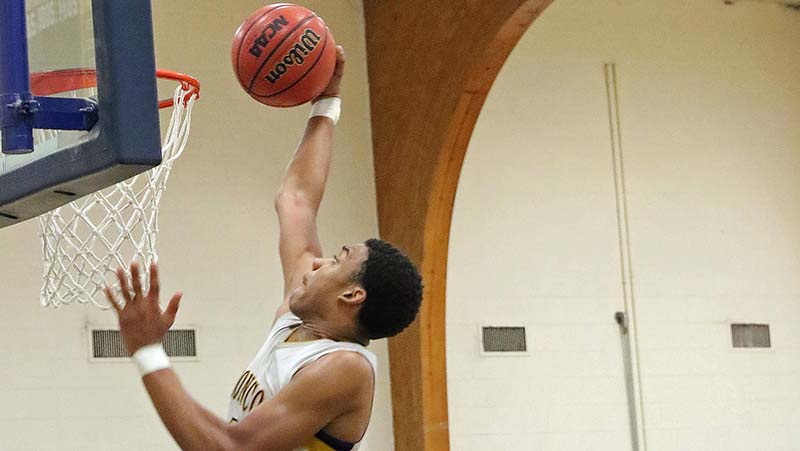 Getting ready to slam one is Drelyn Ford. -- Frank A. Davis | Tidewater News

FRANKLIN
The yellow brick road to the final state tournament in Richmond is a tough one to travel and the Franklin High School Broncos are moving on down that road. One of the Broncos’ old friends, the Colonial Beach Drifters, were in town on Tuesday night in the Peggy Wilkins Gym to face the Broncos in the quarterfinals of the Region 1A State Tournament. They lost to the hosts 79-74.

The game started off fast as usual with a few ties and lead changes. But by the 2:24 mark, the Drifters were showing no respect for the home team as they took charge in scoring with a 17-8 lead. They continued in scoring by connecting on five 3-point baskets to push their lead to 25-18 at the end of the first quarter.

In the second quarter the home team got a little disturbed by the Drifters showing off on their court so they went to work. Drelyn Ford stepped up with a few slams, and scores by Deuntae Jefferson tied the score at 29 and 33 all. A layup by Jefferson later gave the home team a 35-33 lead at the 1:45 mark in the quarter. As both teams retired to the locker room for their half-time talk with their coaches, the score was tied in a dead heat, 37 all.

Returning back to live action in the third quarter of play both teams really continued at knocking heads in scoring and with defense. After a few point leads by the Drifters, Jefferson for the Broncos tied the score at 46 all and later on a 3-point play put the home team ahead 54-53 at the 3:16 mark in the quarter. Again the lead changed a few times until the Broncos Rasean Rawlings connected on the 3-pointer to put the home team ahead 61-59. The third quarter ended with the Broncos up, 65-59.

In scoring, the Broncos had three players in double figures. They were Drelyn Ford with 29 points; Duntae Jefferson with 16 points; and Nyjey Pope with 13 points. The Drifters were led by A. Lyons with 20 points, and T. Whiting and J. Jett both scored 18 points apiece.

Bronco head coach Robby Cutchins said after the game, “ What a team effort. You know, to be able to weather a storm like we did early when the guys came out hitting shots for Colonial Beach that had us down like 25-11. And when you are playing a team that you don’t see on a regular basis during the year and you might catch a little film on them. I had a opportunity to go scout them on Friday night and see what they did with one defense. You know you only got 32 minutes to make changes during the game and we had to make some changes through out the basketball game. And that is why I am so proud of these guys because that is what got us back in this basketball game and got us in control. We beat a very good Colonial Beach basketball team tonight.”

The Broncos move to the semifinals of the Region 1A Tournament on Thursday at 6 p.m. in Franklin High School, and play Northumberland. FHS is one win away from the regional championship and state tournament. 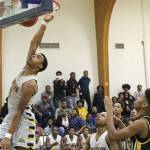 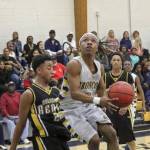 Taking it to the hoop is Deuntae Jefferson 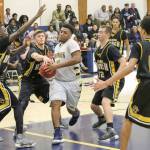 Drawing a crowd of Drifters is Malik Haley 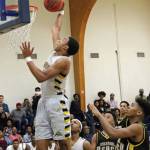 Getting ready to slam one Drelyn Ford 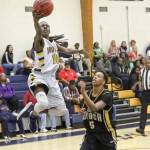 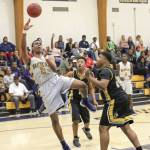