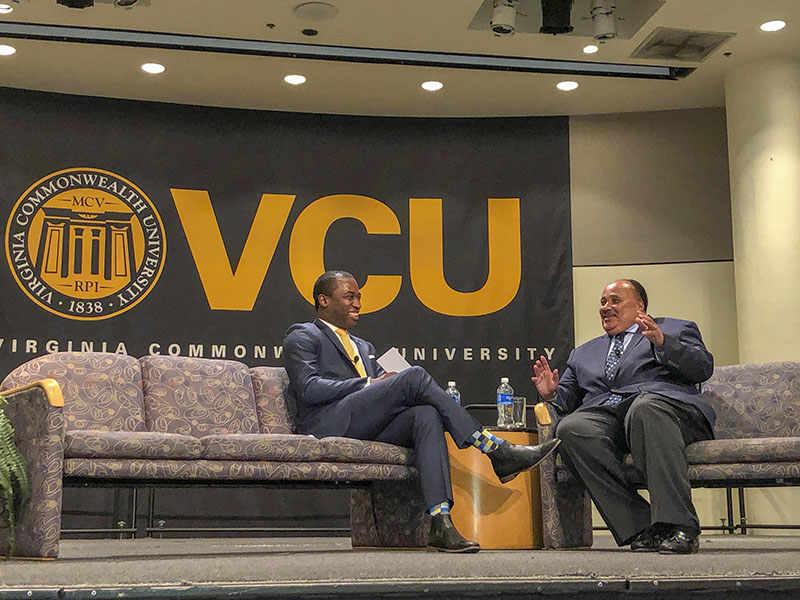 RICHMOND
Decrying America’s “culture of violence,” the oldest son of the Rev. Martin Luther King Jr. praised the survivors of last week’s school shooting in Florida for demanding that government officials implement restrictions on guns in the U.S.

Speaking at Virginia Commonwealth University, Martin Luther King III commended students at Marjory Stoneman Douglas High School in Parkland, Florida, where 17 people were shot and killed on Valentine’s Day, for taking a stand and calling on elected officials to act on gun control.

“Once again, children, young people, lives interrupted forever, of all ages and every ethnic group,” King said. “We could say it’s mental illness, but maybe it’s the climate that exists in our nation. We have certainly created and sustained a culture of violence.”

King spoke Sunday at an event that had been rescheduled from Jan. 21, during VCU MLK Celebration Week, due to inclement weather.

King accused Congress of remaining silent after the 2012 mass shooting at Sandy Hook Elementary School in Newtown, Connecticut, where Adam Lanza gunned down 26 teachers and students.

King pointed to the movement to end sexual harassment that has swept the country as an example of positive cultural change. He said he is optimistic that America will soon see the same results with gun control.

“Every week, someone is losing a job because of the tragedy of sexual harassment that should never have happened,” King said. “So I would say even on this issue where people tragically lost their lives, we don’t know where it’s going to lead, but I am hopeful.”

King said he has personally experienced gun violence not once, but twice. This year marks the 50th anniversary of Martin Luther King Jr.’s assassination in Memphis, Tennessee. Five years later, King told the VCU audience, his grandmother, Alberta King, was shot and killed in Ebenezer Baptist Church in Atlanta by a man who intended to kill her husband.

“It did not deter me or distract me because I had to learn to dislike the evil act but still love the individual,” King said.

He also addressed last August’s chaos in Charlottesville, where white supremacists participated in a “Unite the Right” rally against the removal of a Confederate statue. A counter-protester was killed by a man authorities have described as a neo-Nazi.