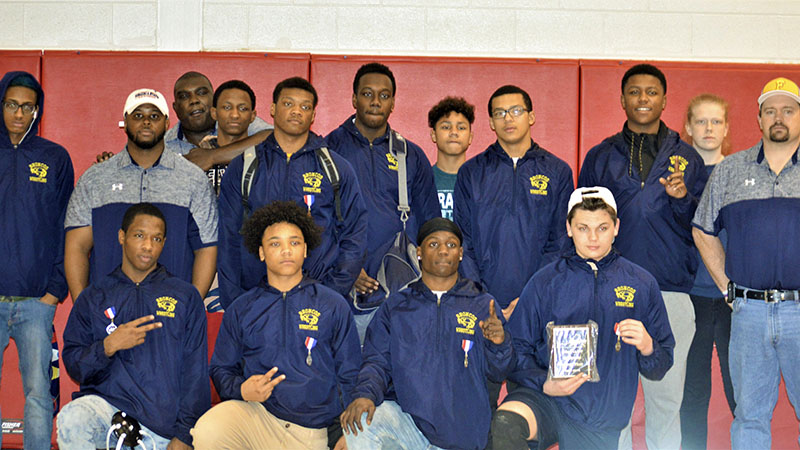 The FHS wrestling team poses with their medals.

FRANKLIN
This past weekend, the Franklin High School wrestlers earned third place out of 14 teams in the Region A/B Tournament at Rivershead High School in Staunton.

Broncos coach Daniel Johnson said of his young athletes, “They’ve wrestled hard this season. It’s been a tough schedule and they showed off this weekend. They stayed in the top four.”

As one might expect, Johnson wrestled and played football in own high school days. He credited Coach Greg Lomax for getting him to return to FHS and assist the wrestlers, which he did from 1994-1999, and took over as the lead coach in 2000 when Lomax had retired.

Johnson praised his assistant coaches McKeller and Gray for their work in getting the team where it is now.

“Last year we took six wrestlers to state and finished 10th in state as team out of 37 schools,” the coach recalled. “This year we’ll take eight wrestlers to the State Tournament in Salem this weekend. I hope to finish in the top five.”

This is a young team for Johnson, who said his only two seniors are Takym Falulah and Deante Watson. He added that two of the team wrestlers are Regional Champions: Joshua Johnson and Da-Shaun Butts, and Joshua Johnson was honored as Region A/B Wrestler of the Year. The three athletes on the team will go as alternates.