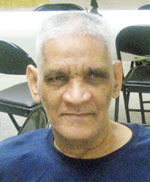 He was born on April 11, 1935, in Guyana, South America. Jerry lived in Guyana until he married Jean Alexis Mentis and moved to Newark, New Jersey, where he became a United States citizen.

Not only did Jerry live in New Jersey, he also lived in Yokosuka, Japan with his son before moving to Franklin in 2005.

He was indeed a family man and opened his home and heart to many family members and friends. He enjoyed talking politics, reflecting on life and participating in family gatherings, especially birthday celebrations.

Jerry was preceded in death by his wife, Jean Alexis.