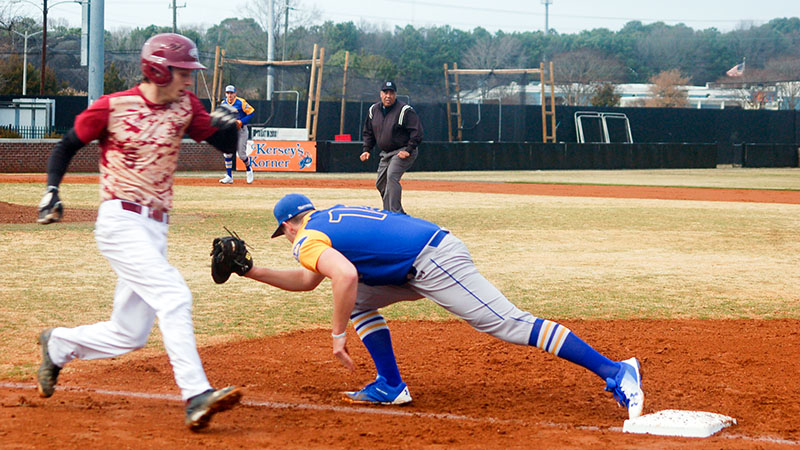 Hurricanes Seth Konkel, right, gets an Apprentice School runner out at first base. -- Submitted | PDCCC

HAMPTON
After months of exercise, practice and practice games, the PDCCC Hurricanes played the first official game in school history on Wednesday. A member of the National Junior College Athletic Association, the new team — formed only just this past summer — started off their season by facing the Apprentice School from Newport News, losing by only one run, 7-6.

The game was played at War Memorial Stadium in Hampton as part of the Hampton Roads Cup, a five-game, five-day round robin tournament that showcases college teams from the Tidewater area: Paul D. Camp Community College, the Apprentice School, Stratford, Bryant and Stratton and Thomas Nelson Community College.

David Mitchell, PDC athletic director and head baseball coach, said there also will be a traveling cup that goes to the team for the best overall record, and that is expected to become an annual tradition, which he added, “is a great thing.”

“There was a lot of excitement on our end with the coaches, student athletes, parents and fans,” said Mitchell about the first game.

Speaking about the Apprentice School players, he noted they typically play in the World Series within their college division.

“We took over 25 freshmen and sophomores to play against juniors and seniors with experience. Considering all that, we did extremely well. We actually had three runs in the fourth and two in the fifth to take a 5-3 lead in the fifth inning,” the coach said. He added that everyone had butterflies and jitters, but it was still pretty exciting.

“Our coaching staff was extremely pleased with how they played early in the game,” Mitchell continued. “We gave up four runs in the bottom of the fifth, which allowed the Apprentice School to beat us 7-6. There was some pressure … We had a chance. We wanted to have a shot late in the game and we did. We scored one in the sixth, but in the seventh, the runner didn’t score.”

In both this game and the one on Thursday, the coach noted how well his team had been doing by the fifth inning, which he referred to as a time of “high heart rate,” which creates pressure.

“We’ve got to be able to handle that better,” he said.

From a statistics viewpoint, the Hurricane had six runs, eight hits and only one error defensively.

“The big difference was in pitching — they [the Apprentice School] have a little more depth than we did,” said Mitchell, adding that’s something that will get better as the season progresses.

The next day, the Hurricanes went against Stratford, another four-year institution, and lost 10-3.

Mitchell said that it’s important to note his team was also playing against juniors and seniors.

“They’ve got some experience,” he said of the competition. “Our guys are learning as they go.”

PDC played a game similar to the first one.

“We had two runs in first, and one in the third, and leading again 3-2 going into fifth inning,” he said. “We were laughing afterward that if there were only five innings, we would have won.”

Stratford went on to score five runs in fifth and ended up winning the game.

Something that the Hurricanes will be working to correct is better pitching late in the game.

The coach then spotlighted some of his players:

On Friday, the Hurricanes played against Thomas Nelson Community College, but the results were not available by press time. Mitchell said on Friday morning it would be a good day to measure his team against another two-year school that’s comparable to PDC.