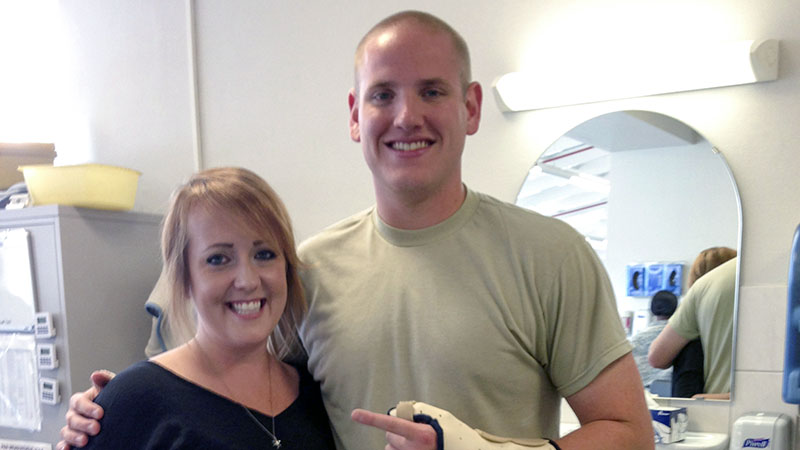 Kirby Kirkland Samson with Spencer Stoner during the occupational therapy for his thumb. He was one of three men who overthrew a terrorist that attempted to attack a train to Paris on Aug. 21, 2015. Stoner’s injuries took him to the hospital where Samson was serving an internship in becoming an OT. -- Submitted | Kirby Kirkland Samson

ALTUS, Okla.
How often in our workday lives do we meet people of any renown? Probably safe to say ‘Very seldom.’ But Kirby Kirkland Samson — a Southampton Academy graduate (Class of 2001) — found herself three years ago face to face with a genuine hero.

On Aug. 21, 2015, three American men on a train trip to Paris found themselves becoming heroes when they realized a terrorist was attempting to attack passengers. Anthony Sadler, Alek Skarlatos and Spencer Stone rose to the occasion and were able to overcome the would-be killer. But it was not without a cost to the unexpected heroes. Following emergency surgery in France, Stone was sent to  Landstuhl Regional Medical Center in Germany, which is where Kirkland was doing her fieldwork rotation. This was toward earning her master’s in occupational therapy.

Samson explained via a phone interview that the LMRC is the closest facility for wounded soldiers arriving from down range, and also it’s a stop-over for serious casualties from Iraq and Afghanistan before being medivaced to Walter Reed from Ramstein Air Force Base.

“I had started my rotation in the hand therapy clinic at LRMC the week prior to the incident that occurred on the train headed to Paris,” Samson said. “Stone’s was the first case that I followed. Talk about your first weeks!

“While there, I treated many service members and their families that unfortunately have stories of pain and sacrifice that the world will never know. I’m so glad that at least one of them is getting the attention they deserve.”

During the struggle, the AK-47 the terrorist brought had jammed, which is reportedly uncommon for such a weapon. Resorting to a box cutter, the man lacerated Stone’s neck as well as a tendon at the base of Stone’s thumb, but missed all major structures in that area.

“I followed him for two week in German post-op,” she said. “He had a very good recovery from what we saw at the time, and was already gaining mobility. I have not contacted him professionally since then. What I could see it [the injured area] was on its way [to healing.]”

She added that the men “deserve good things” for what they did to prevent tragedy that day.

Thinking back on the occasion, Samson recalled, “It was a very surreal experience for me.”

When Stone came in, she and the clinical instructor sat with him to examine the wounds, make custom splints and do all the things necessary.

“He was very candid, lighthearted,” Samson remembers. “I feel it hadn’t sunk in for him yet. It was an honor to be with him for those two weeks. He was funny and appreciative. It was a very good experience for me. It was an honor and a once-in-a-lifetime experience.”

Such acts of heroism become the source of movies. She remembered the instructor and her joking with Stone about who would play his role.

As it turned out, director Clint Eastwood has the three men portraying themselves in the movie, “15:17to Paris,” which is premiering this weekend.

Following her three months, she had completed the capstone of her 2-1/2 years of work and study for her degree.

The daughter of Sandy Kirkland of Courtland, and the late Thurloe Kirkland, Samson attributes her best friend Lindsay Schafer Pankey for inspiring her to become an occupational therapist.

Pankey had developed rheumatoid arthritis early in their high school days, which significantly affected her joints.

“I really looked up to her. We did all the high school things, such as cheerleading. She eventually decided to become a speech therapist. That really clicked to me then. I was really inspired.”

Pankey had died in 2008, and even to this day her family participates in a walk to raise money for rheumatoid arthritis research.

Perhaps somewhat ironically, Samson has been similarly affected by the malady.

“I’m becoming my own OT,” she joked, adding philosophically, “It’s part of my journey.”

Her travels in life have also connected her to Maj. Daniel Samson, a pilot in the Air Force. He’s currently training in Oklahoma, where she’s visiting. They’ll eventually return to their home in Annapolis, Maryland.