Broncos lose one, win one against Brunswick 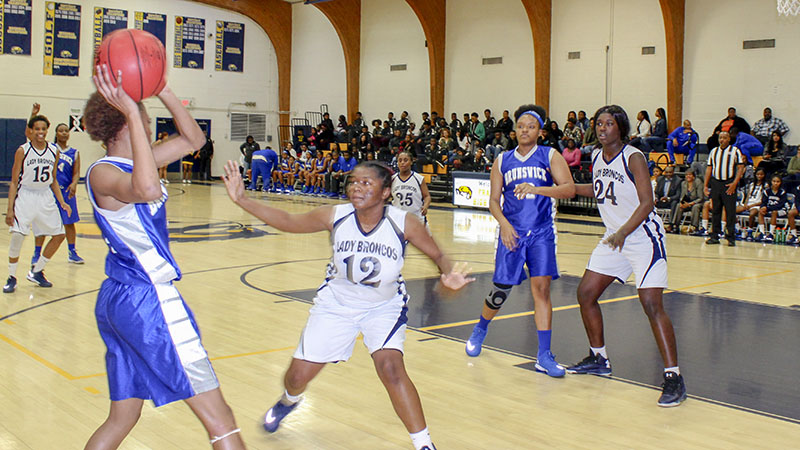 One of Brunswick's players looks for an opening to pass the ball. -- Stephen Cowles | Tidewater News

FRANKLIN
The Lady Bulldogs of Brunswick High School were raring to go on Saturday against hosts Lady Broncos of Franklin High School. That energy on the court produced the 59-31 victory.

By the end of the first quarter, the visitors were already at 14 to 5. Brunswick kept going from there throughout the second quarter, getting up to 30 points by the half. FHS managed only to get to 10 points at the 5:08 mark, and stayed there until a few minutes into the third.

The Lady Bulldogs continued to rack up points — six of which came from free throws in the third quarter — and were at 44 to the Lady Broncos’ 18.

In the fourth, FHS seemed to find more energy and more baskets, but by then Brunswick had achieved a spread of approximately 20-plus points in their favor and kept that to the end.

The boys team fared better, winning 60-64, but not without considerable effort, especially in the first part of the game.

FHS Head Basketball Coach Robby Cutchins said that Brunswick applied pressure and came out 19-3 in the first quarter, but that the Broncos “chipped away” and got the score to 27-22 by the half.

“We applied some pressure of our own and started gaining control of the ball [in the third,]” said Cutchins.

By the fourth, it was mostly a five to six-point spread difference with FHS leading.

“It was phenomenal effort,” he said about his team being able overcome such a deficit early on.

Playing five games in six days, Cutchins added, “I was very impressed by their performance.”

The Broncos host Greensville today, Jan. 31, beginning with the JV game at 4:30 p.m. The Lady Broncos follow, and the boys varsity at 7 p.m. On Thursday, Northampton will be the guests. On Friday, FHS hosts rivals Southampton Indians beginning with boys JV at 3 p.m. These are games rescheduled from Jan. 12.