FRANKLIN
In what many may have thought would be another Park View Dragons’ victory coming — which have been numerous over the years, as they have dominated the Tri-Rivers District — turned out to be quite a different story. The Dragons came into the contest on Wednesday night undefeated in the district, and with just one loss on the season dropping one to Dinwiddie over the holiday break. 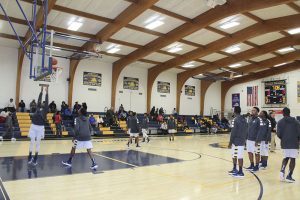 The Broncos of Franklin High School warm up before their game.

Franklin High School was prepared for Park View, which just happened to be the Broncos’ third game in as many days, and their third of what will be five out of six days due to recent snow in the area. Stopping the high-flying and sharpshooting Dragons would be a tough task, but the Broncos were up for the challenge.

Park View came out with a high level of intensity knocking down shots and using their length to finish at the rim just as they had done all season.

The Broncos fell behind by eight points early, but never stopped grinding and trying multiple things defensively. After causing a few last-minute turnovers to end the first half, FHS would find themselves only trailing the Dragons by five with a score of 28-23 at the half.

After some halftime adjustments, a little more pressure trying to keep the guards extended away from the paint and keeping Park View’s big men away from the bucket, the Broncos turned in one of their most impressive quarters of the season outscoring the Dragons 21-10 in the third quarter.

Franklin took a 44-38 lead heading into the final frame. Containing Park View would still be a tough task for the Broncos, but they answered the bell with a solid fourth quarter outscoring the Dragons 20-15 in the final frame. The Broncos were led by big man Drelyn Ford, who turned in another phenomenal performance with 24 points, 16 rebounds, six blocks and seven steals. Deuntae Jefferson chipped in 10 points, five rebounds, five assists and five steals.

Coach Robby Cutchins said after the game, “This is a huge win for our program. So happy for these young men, simply for them to see their hard work paying off night in and night out, and then to knock off an opponent like Park View instills the confidence in them that they will continuously need coming down the stretch the final few weeks of the regular season.

“It’s just like we talk all the time, you only get out of something what you put in to it and I tell them all the time that life is no different. There so many things we learn through sports that carry over as these young men move on past high school and I’m so happy to see them understanding that.

“Tonight, their hard work continued to pay off for them! The fans were phenomenal and have been the last few nights and we thank them for that and look forward to much more of the same as we have 5 more games in a row at home.”

The Broncos have won 10 out of their last 11 games with their last loss coming against 4A Smithfield. Franklin returns to action at home tonight against Surry. The team looks to avenge a one-point loss to Surry from earlier in the season. The Broncos will also be at home on Saturday against Brunswick.