MURFREESBORO, N.C.
The Chowan University Lady Hawks held on to defeat the Lady Trojans of Virginia State University with a score of 65-61 at the Helms Center on the campus of Chowan University on Saturday. For the Lady Hawks it was a constant battle for the whole game as there were five ties and six lead changes. Lady Hawks Mariah Coker led in scoring with 21 points. 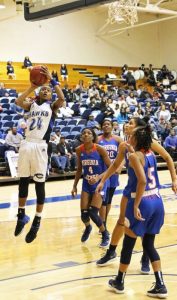 Unchecked on a jump show is Dhyamond Crenshaw. — Frank A. Davis | Tidewater News

For the Hawks, they too were involved in a battle the whole game as they also had five ties and three lead changes. But unlike the Lady Hawks, the Trojans had the upper hand as the buzzer sounded to take a 64-61. Gus Rowland and Tim Hewett both scored for the Hawks 16 points each. Also in double figures for the Hawks was Dino Muminovic with 13 points.