COURTLAND
The work to establish the Nat Turner Trail in Southampton County continues. 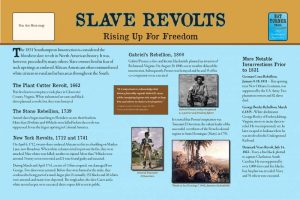 This is a mock-up one of the signs, according to Lynda Updike of the Southampton County Historical Association. — SUBMITTED

From 6 to 8 p.m. on Tuesday, Jan. 23, the public is invited to review and comment on 19 mock-ups of signage that would highlight the historical insurrection of 1831. This hearing will be in the county’s Board of Supervisors board room.

The Southampton County Historical Society’s goal is to have the signs installed later this year. The path will commemorate when Nat Turner had led a band of slaves in a revolt that cost the lives of several white residents of the county.

In conjunction with the Rebecca Vaughan House restoration for use as a museum about the insurrection, a walking trail through Courtland has been developed to guide visitors and students to various sites associated with Nat Turner’s Rebellion.

For more information about either the trail or house project, call John V. Quarstein at 879-3420 or johnquarstein@gmail.com.