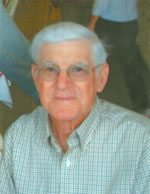 After school he and his brother, Elliott, formed a partnership (Johnson and Johnson) and farmed together for 35 years. During their farming years they were awarded trophies seven different years for growing the most peanuts per acre. When Walter and Elliott’s sons completed their education and returned home, they decided to end their partnership. Walter then formed a corporation known as Johnson Farms, Inc., with his son Edward. They farmed together for 20 years.

Walter was a lifelong member of Beaver Dam Baptist Church. He served as a deacon and a trustee. He was the last surviving member of the Men’s Bible Class and he served as co-chairman of the Building Committee.

He also served on the FSA Committee and the Virginia Peanut Growers Association.

The funeral will be at 3 p.m. on Saturday, Jan. 20, in Beaver Dam Baptist Church with the Rev. Warren L. Johnson and Pastor Matthew J. Johnson officiating. Burial will follow in the church cemetery.

Visitation will be on Friday in Wright Funeral Home from 7 to 8:30 p.m.

In lieu of flowers and at Walter’s request, memorials may be made to the Beaver Dam Baptist Church Cemetery Fund, 3593 Carrsville Hwy., Franklin, VA 23851, or to the Carrsville Volunteer Fire Department, P.O. Box 27, Carrsville, VA 23315.