A personal case for letting in refugees

As President Trump continues his push to severely limit the number of refugees our land of liberty lets in, most recently by his action to deport Salvadoran refugees and through his bigoted insult against Africa and Haiti, here’s a story from my family: My wife, Kathleen, might not be here, or alive period, if her maternal ancestors had not made it here.

I thought about that at an October family wedding and at a holiday gathering. My wife’s clan is large and strong. Now. 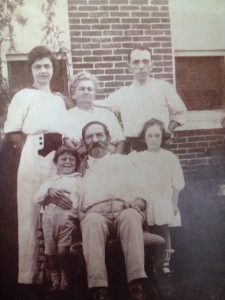 Moses Bayuk, center front, who essentially saved the ancestors of John Railey’s wife from the Russian pogroms, is surrounded by family in the early 1900s. — Submitted | The Bayuk Family

But dial it back to 1881, when Czarist Russians were violently persecuting Jews, including my wife’s ancestors, and imposing severe restrictions that led Jews to flee persecution and poverty in what is now Poland.

Enter my wife’s great-great-grandfather, J. Moses Bayuk, a visionary, a brilliant activist/scholar and fan of the great Russian writer [Leo] Tolstoy. Bayuk and others, in fleeing what is now Poland, persuaded groups including the Alliance Israelite Universelle to financially back their settlement in the U.S. They also received assistance from wealthy Jews in Philadelphia and New York and other groups. The Hebrew Immigrant Aid Society helped them once they got here, getting them land grants, Ellen Eisenberg writes in her 1995 book, “Jewish Agricultural Colonies in New Jersey: 1882-1920.”

In that time, refugees were not classified as a legal category. Restrictions on immigrants from most countries were far less stringent than they would become in the early 20th century, and perhaps even in our own 21st century.

Bayuk led in setting up Alliance, the first sustained Jewish farm colony in this country, in New Jersey, about 50 miles south of Philadelphia. After some severe hardships, it eventually thrived. And its establishment could not have been more timely.

In the early 1900s, Russian leaders often incited the killings of mass numbers of Jews. Many of the Jews who survived those killings in Eastern Europe didn’t make it through Hitler’s Holocaust in Germany in World War II. And many Jews seeking refuge in this country during World War II were turned away.

The late Bluma Bayuk Rappoport Purmell, my wife’s great-aunt and a daughter of Moses, detailed her life at Alliance Colony in a 1981 book she wrote with Felice Lewis Rovner, “A Farmer’s Daughter: Bluma.”

By World War II, Moses Bayuk’s sons had ventured into Philadelphia, where they established a cigar factory that eventually became famous for Phillies cigars. Others from Alliance went into the clothing industry in Philadelphia and New York.

My wife’s mother was born Nina Joan Levin in Philadelphia on Jan. 6, 1936. Her father was a World War II veteran and entrepreneur. Her family moved to the New Jersey suburbs during the war, where, in high school, she met Richard Haggerty, a descendant of Irish and German immigrants. They married in 1953, while he was in the Navy, and eventually moved to High Point. My wife’s father was a commercial photographer and studio owner. Her mother was a public school teacher who told my wife the stories of her ancestors, and how lucky they were to escape the Russian pogroms. Nina Haggerty stood up for underdogs.

She and her husband raised eight fine children who include business directors, entrepreneurs, a teacher, a nurse and a veterinarian. Their children are making their way well in America, too, as will their grandchildren, all because their ancestors made it into this country all those years ago. They join in this country a fine tapestry of refugees and immigrants. I am thankful for them. And I wonder about all the contributions the refugees who didn’t make it in might have made, and what contributions their descendants might have made. I wonder about what contributions refugees Trump wants to keep out now might make — and what dangers those potential bans put them in.

Family stories are our American bedrock. Nina Levin Haggerty died of breast cancer in 1988, several years before I met her daughter Kathleen. But Nina told the story of her ancestors to Kathleen and she has told them to me. We pass them on to our daughter, and hope that she will pass them on to her children and grandchildren. We want this story to live.

This country, our country, is built on refugees and immigrants. Our very spirit demands that we continue to carefully admit them, the best and the brightest. On this we are built.

Moses Bayuk, who went on to write scholarly books before dying in 1932, is buried at Alliance.

His daughter Bluma, who died in 1997 after 109 full years that included being a nurse and artist, wrote in her book that “My father often stated, ‘After my body crumbles, I shall still be. In some way, my vital force will continue, and I shall always be near when you need me.’ I have felt Dad’s presence so often that I know the strength of his words. Nothing so powerful as human thought can be destroyed. The soul, the sacred vessel of the mind, exists forever.”

JOHN RAILEY,  who grew up in Courtland, is the editorial page editor of The Winston-Salem Journal, which published this column.