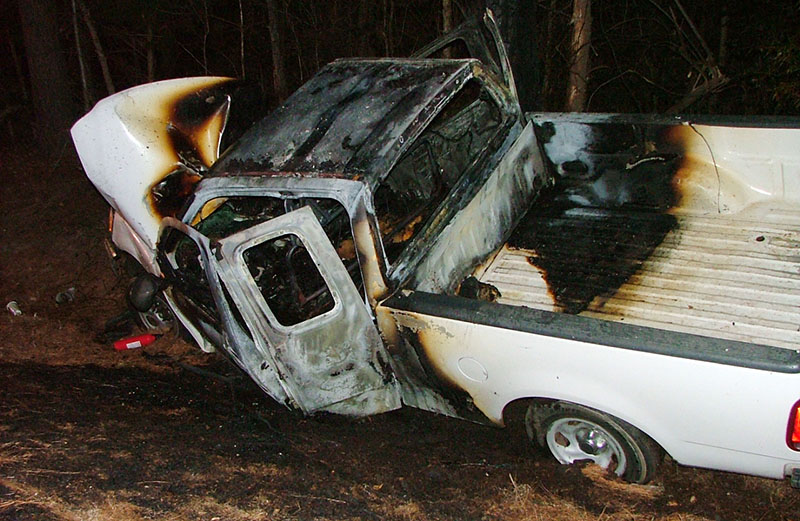 Deputies for the Southampton County Sheriff’s Office rescued a driver from his vehicle after he crashed on Tuesday night on Ivor Road. -- SUBMITTED | GENE DREWERY

COURTLAND
A Southampton County sheriff deputy pulled a man from a burning vehicle just seconds before it was engulfed in flames on Tuesday. Maj. Gene Drewery, spokesman for the sheriff’s office, said the department received the report around 7:50 p.m. that evening.

The report described a motor vehicle crash on Ivor Road near Guy Place Road in Courtland, adding that the vehicle was on fire and a victim was trapped. On-scene firefighters and several citizens assisted the deputy in pulling the victim from the vehicle. Responding agencies included the Southampton County Sheriff’s Office, the Courtland Volunteer Fire Department, Courtland Volunteer Rescue and the Sedley Volunteer Fire Department. Drewery said the assisting firefighters and citizens helped to suppress the fire until the victim could be removed from the vehicle. The victim, identified as Clarence Lowery, 48, of Sumter, South Carolina, was airlifted to the Medical College of Virginia. As of Friday afternoon, Lower’s condition was unknown.

Deputies have charged him with driving under the influence.