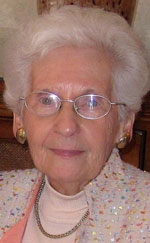 Following her childhood years in Kinston, North Carolina, Mrs. Stephenson entered boarding school at Pineland College and graduated in 1939. She remained at the school for her freshman and sophomore years of college graduating in 1941. From there, she entered Miss Hardbarger’s School in Raleigh, North Carolina, where she learned to type and take shorthand. At various times in her professional career her work included that for the FBI, Washington, D.C.; Northampton County, North Carolina; Southampton County, Virginia; and the Commonwealth of Virginia.

In 1942, she married her husband, a proud son of Northampton County. Following World War II, she moved with her husband and son, Nick, to Severn, North Carolina, a few miles from the border of Virginia. There, two more children were born, a son who died in infancy and a daughter, Ruth.

In 1955, the family moved to Boykins, Virginia, three miles across the North Carolina border, where she made her home for 62 years.

Mrs. Stephenson was an active member of her church, serving in many capacities through the years. She was a former member of the Junior Woman’s Club, later the Tararra Woman’s Club and the Kirby Music and Literary Club. She served two terms on the board of Paul D. Camp Community College, often mentioning her pleasure to have served during the building and opening of the college’s Work Force Center.

For a number of years, Mrs. Stephenson was active in the Fine Arts Foundation at Chowan College, a junior college located in Murfreesboro, North Carolina. When she learned that the school intended to return to its status as a four-year-degree-granting institution, she enrolled at 70 years of age as a member of the new junior class and finished her degree with honors.

Surviving are her son, J.C. Stephenson III of Richmond and Boykins; her daughter, Ruth S. Thomas and husband, John; her grandson, John S. Thomas and wife, Rebecca, and their children, Landon, Luke and Savannah Jane Thomas; and her granddaughter, Anne T. Freeman and husband, Steven, all of Raleigh. Additional survivors include three first cousins, three nieces, five nephews and their children.

Mrs. Stephenson’s memorial service will be at 11 a.m. on Saturday, Jan. 6, in the Boykins Baptist Church, Boykins.