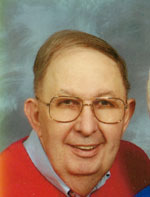 Affectionately known by family and friends as “Johnny,” he spent his growing up years in the South Quay area of Suffolk. During his childhood years he attended South Quay Baptist Church where he accepted Jesus Christ as his Savior and followed in believer’s baptism. During his adult years he attended Windsor Congregational Christian Church, Windsor, Virginia.

He was the son of the late John Wallace Moore and Mary Elizabeth Duck. He was also preceded in death by his wife, Mary Ann Robinson Moore on Nov. 9, 2017.

He is survived by a brother, William “Billy” Moore and wife, Peggy; a brother-in-law, John Edward Robinson and wife, Shirley; two nieces; one nephew; and cousins.

The gathering of family and friends will take place in Wright Funeral Home, Franklin, beginning at 10 a.m. on Thursday, Jan. 4, followed by a memorial service at 11 a.m. Burial will be private.

In lieu of flowers, contributions may be made to the Windsor Congregational Christian Church Building Fund at P.O. Box 407, Windsor, VA 23487.