Brick by brick, we’ll make it

During a recent cold sunset as demolition men took down the building where I cut my journalistic teeth, I scrambled to grab some bricks from the rubbish. I needed something to hold onto in the new year. 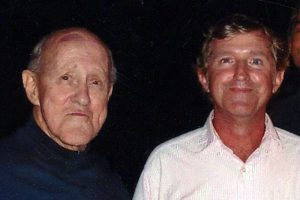 John Railey, right, with Joe Brown, one of his first and best editors, who stood up for one of the bricks of our democracy, the free press. — Courtesy | Tommye Morrison

Day by day, our institutions are assailed. We journalists have long scrutinized FBI cases, including ones the FBI has blown, but many of us knew the agency’s overall intentions and work were basically good. Now we have a president who suggests to the American people that the FBI can’t be trusted, nor can our national security agencies nor the free press nor our voting system. Many of President Trump’s supporters, including some in high places, are echoing his thoughts, dividing Americans and encouraging distrust in our bedrocks.

This is how democracies can crumble, just as sure as the building housing one of my first workplaces, The High Point (N.C.) Enterprise, fell the other day. The Enterprise, fortunately, carries on in another building, but the destruction of its original home might serve as a metaphor.

President Trump has denied but seems to leave open the possibility of firing Robert Mueller, the special counsel probing Russian involvement in the 2016 presidential election. And Trump leaves open the potential of pardoning witnesses close to him cooperating with that investigation.

Should any of that happen, it would be a major blow to the American system for which our elders fought and died. People like Medgar Evers, a black World War II vet who was assassinated in his native Mississippi while fighting for civil rights for blacks, including voting rights. The elders who fought for us include people like Joe Brown, who spent his career in that building that was demolished the other day.

By the time he got to the Enterprise, Joe had already been a radar navigator with the Army Air Force during World War II, flying combat missions in the Pacific on board a B-29, and gone on to graduate from Carolina.

As the top editor at the Enterprise, he quietly led the staff in standing up for the First Amendment, government transparency, good public safety and education, civil rights and underdogs in general. He could be grouchy in the grand old way of good newspapermen, especially with reporters who didn’t live up to his high standards for accuracy and grammar. He was also decent, honest and loyal, quietly setting a model for his reporters to be the same. He taught us to press for the full story, but to be fair and honest about it and to always protect our sources.

We caught our share of hell from members of the public for reasons ranging from they didn’t think a story should have been in the paper to factual errors we occasionally made and corrected. The Enterprise staff exposed corrupt public officials, but few people then, except for the occasional conspiracy theorist, questioned the whole systems on which our democracy is based. We could usually agree with our critics on a basic set of facts regarding those systems.

I started at the Enterprise in the mid-1980s, just over a decade past Watergate, a time when we’d seen a president stumble and fall and his political party, the opposing party and law enforcement do their jobs and, ultimately, pick up the country and move it forward again, gradually restoring trust in our systems.

Now that trust is being eroded again. It’s harder in these days of nonstop social media and Big Media TV that drives many of us to our own silos and tries to keep us there. Trust in the basics, including newspapers like ours, is being challenged like never before.

Managing editor Andy Morrissey, who leads our news department, and his staff are committed to living up to the high standards set by our forerunners.

And on my side, the opinion side, we try to do that as well. My deputy, Mick Scott, and I gladly spend a lot of time in phone talks and email communicating with readers, those who agree with us, and, even more important, those who don’t. As I often say, we must be doing something right, because conservatives tell us our pages are too liberal and liberals tell us our pages are too conservative. As always, we welcome your letters.

We’ll keep doing our best to keep the American dialogue going, and to present the best journalism we can in conservative columns and liberal ones from the syndicates and local folks, and in the editorials and columns we write.

We’ve got predecessors to live up to.

But I’ve got on my desk a brick from the building where he taught me so much. Our democracy is built on such bedrocks. Brick by brick, we’ll make it through the new year and beyond. For Joe and all the rest.

JOHN RAILEY,  who grew up in Courtland, is the editorial page editor of The Winston-Salem Journal, which published this column.