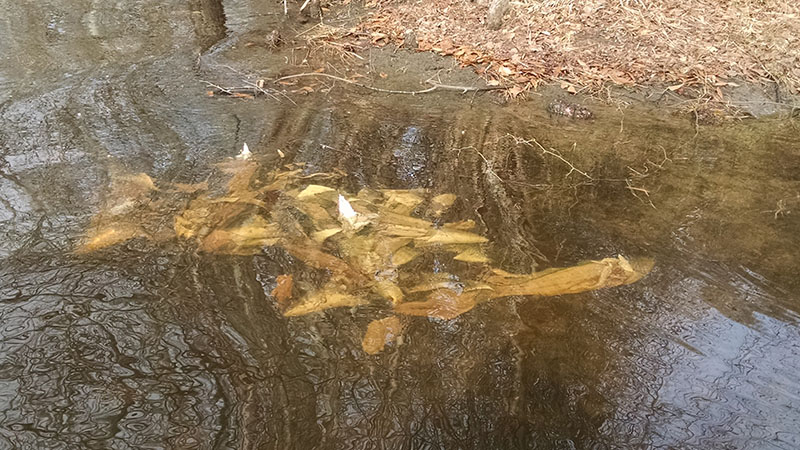 A pile of speckle trout dumped at the boat landing in the Blackwater River. -- Submitted | Jeff Turner

Spirit of Moonpie and I spent the 14th through the 16th on the Blackwater above Joyner’s Bridge. The water was 36 degrees. Air temps ranged from 21 to 55.

IT WAS COLD! In fact on the second day by the late afternoon I was as cold as I have been in many years on the river. I guess this old age thing is getting to my bones when it comes to handling really cold temps.

I was amazed the river looked as good as it did as I had not been up that way in nearly a year. There were no derelict limblines and trash was really not that bad. I picked up about 30 pounds downriver from the boat landing. I usually get a lot more than that in this part of the river. So I was really happy about that. Is someone else helping keep the river picked up up there?

The fishing on this trip was not good. I mostly wanted to see if the Blackfish were doing their thing yet, but after hours of jigging I never got a hit. I did catch three white catfish while jigging the blade bait but that was it. Thirty-six-degree water is really cold and really slows the metabolism of many fish species waaay down.

Speaking of that, I saw two shellcrackers on this trip that were dead or nearly dead floating down the river over a mile apart from each other. It was very odd; they had not marks on them, no wounds at all. A friend of mine told me he had seen the same thing upriver several miles the day before. I cannot figure out what that was all about. Maybe the rapid water temp drop we had caused it, like cold shock or something, I don’t know. It is very strange though if that was the cause. Why were there not more shellcrackers killed or affected if it was a cold snap issue to that species? Oh, well, another river mystery.

Moonpie Critter patrol was pretty active this trip. The deer were everywhere, jumping in the river, jumping out of the river and doing their best to outsmart the deer hounds, which is always fun to watch. We also saw a bald eagle and a juvenile. Both were interested in the mess of speckle trout some uncaring person dumped on the boat-landing ramp. It is against the law to dump or transport fish from one location to another body of water. Especially bad was the fact that this was a species that is not native to the Blackwater River.

The reason it is bad is because these fish might have a disease or other issue, which by dumping in the Blackwater could transmit that disease or problem to fish in the river. Plus it’s just damn trifling for someone to dump a bunch of guts and rotten fish right where the rest of us launch and retrieve our boats. Maybe the word will get back around to the person who done this and they won’t do it anymore. Lord knows I try to educate folks on what’s good and bad out there. I guess there will always be a need for that to help protect the two rivers we call the Blackwater and Nottoway.