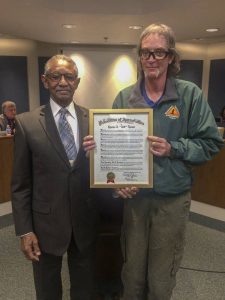 Southampton County Board of Supervisors Chairman Dallas Jones, left, present a resolution of appreciation to Jeff Turner, the Riverkeeper of the Blackwater and Nottoway rivers. — Stephen H. Cowles | Tidewater News

Turner, who founded the Blackwater-Nottoway Riverkeeper Program in 2000, said he was the one who proposed dissolving the organization to the board at its last meeting.

“That [getting the rest of the board to vote to dissolve] was a non-issue pretty much, as most of them have served for 10 years or more and are in their 70s and 80s, and were [also] ready to retire,” he said, adding that his ongoing health problems contributed to his decision to step down. “With this syrinx thing I have in my neck, there is no way to really know what its going to do or when.

“I could wake up tomorrow and be completely paralyzed again, or dead if it shuts down the communication to my heart. Or it could continue like it’s currently doing and just re-paralyzing me a little bit at a time. That being so, I needed to end the BNRP now while I’m physically and mentally able to see its ending in a good note.”

He added that though he will no longer hold the title of “riverkeeper,” which is a trademarked name the Waterkeeper Alliance owns, Turner intends to continue spending time on the Blackwater and Nottoway rivers.

“I will still be working with local, state and federal agencies, and I will still be doing my patrols,” he said. “Hopefully, I can spend even more time on the river now… minus the headache of running a large nonprofit and the myriad responsibilities and laws that have to be followed for that endeavor.”

Though the Riverkeeper program is formally ending, Turner said the Blackwater Nottoway RiverGuard  will follow, but cryptically would not expand on the subject.