This game would pretty much go back and forth the entire game, with the Eagles getting up six to eight points on numerous occasions. The Broncos trailed 24-20 at the half and the second half would not be a let down to the packed house. The Broncos kept fighting and clawed their way to a 4-point lead with 50 seconds remaining. 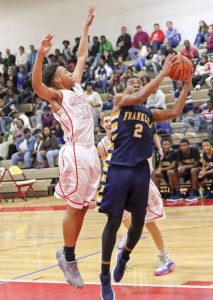 Drelyn Ford checked by Anthony Rawlings during the game between Franklin High and Southampton High on Dec. 2. The Broncos will go to Indian territory for another game on Friday, Jan. 12. — FILE

Malik Haley sealed the deal with a pair of late free throws and the Broncos came out victorious with a 57-52 victory over the Eagles. The Broncos were led by the reigning all-region member Drelyn Ford, who had an impressive stat line of 12 points, 18 rebounds and five blocks. Haley led the Broncos in scoring with 14 points.

Coach Robby Cutchins said after the game, “So proud of the fight the boys showed tonight in such a huge game against a great team. We got down on a number of occasions, but we never gave up and just kept grinding it out. We made a couple of adjustments defensively in the second half that caused them some problems and we capitalized on some turnovers which was huge. Big win for the program!”

The Broncos turned right around on Saturday and played in the inaugural Ralph Joyner Tip-Off Classic at Sussex. The Broncos played Carver College and Prep and came out victorious 54-41 after trailing 21-14 at halftime. Nine second half 3 pointers from the Broncos led to the victory.

The Broncos were led by Deuntae Jefferson, Dajon Frazier and Nyjey Pope, who all had 15 points. Cutchins added, “It is tough to turn around and play a day game after such a huge win on the road last night. We had a slow start but we found some life in the second half and got some really quality play from our bench in order for us to get the win.”

ROBBY CUTCHINS is the varsity basketball coach for Franklin High School. He can be reached at robbyc@bobbystires.com.