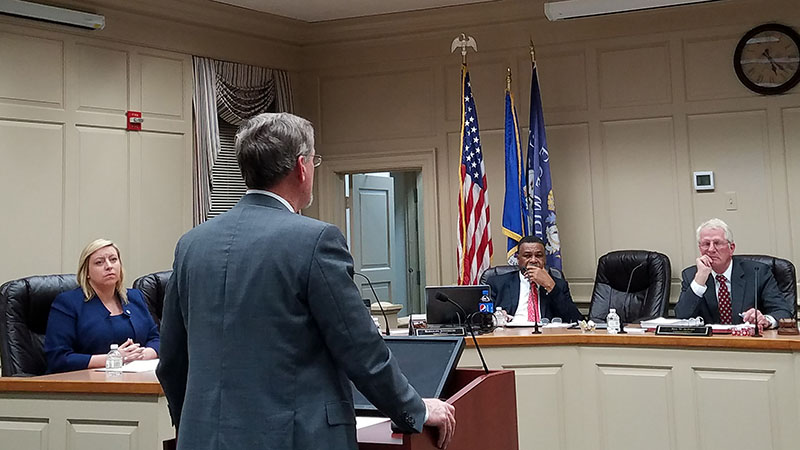 ISLE OF WIGHT
Two state legislators for the Tidewater area, Sen. John Cosgrove (R-14) and Del.-elect Emily Brewer (R-64), traveled to Isle of Wight County on Thursday afternoon to meet with the county’s Board of Supervisors and School Board and hear their concerns for the upcoming 2018 General Assembly session. Topics discussed included public school regulations, differences in taxing authority between cities and counties, and difficulties in securing state funding for rural road improvements.

First to address the legislators was Dr. Jim Thornton, superintendent of Isle of Wight County Schools, who spoke on the division’s new in-house career and technical education program. He asked that public school divisions be given more freedom to balance classroom time with hands-on learning.

As an example, he cited difficulties that teacher qualification regulations can create in hiring skilled professionals to teach CTE courses.

“I don’t want a teacher, I want a professional,” Thornton said. “So I’m going to pay them less [than they were making in their fields] because he’s a teacher now, and then tell him now you have to take classroom management [courses.] Those burdens [are] keeping us from getting the high quality people we want.”

On the topic of differences in taxing authority between cities and counties, Assistant County Administrator Don Robertson used the town of Windsor’s cigarette tax as an example of the disparity.

“The town of Windsor has the ability to have a cigarette tax, counties don’t,” he said. “So I can live in the town of Windsor and buy cigarettes and the town derives a benefit from that. I can drive across the town line, in some cases next door, and the county derives no benefit.

“Cities and towns have much more discretion in areas of local taxation, so they have the ability to address local needs with local funds. We’re saying we can do more locally if we had the authority to do that.”

However, Cosgrove countered that, in addition to having greater authority to levy taxes, independent cities also typically pay for their own roads, whereas counties typically have access to funding through the Virginia Department of Transportation. But he ultimately agreed that the General Assembly should look into the disparity.

This led Board of Supervisors Chairman Rex Alphin to bring up the matter of VDOT funding for the county, which he said has been reduced over the past several years.

“We’ve seen drops of hundreds of thousands of dollars n secondary road funds for paving dirt roads,” Alphin said. “A lot of focus seems to be on those large mega-projects for the region. It leaves us at a disadvantage.”

Brewer said that the problem may be with VDOT’s Smart Scale tool, which it uses to evaluate the cost versus benefit of road projects.

“It’s doing great things for the main arteries but we forgot small counties and towns,” she said, suggesting that the House of Delegates look into creating a secondary rating scale for secondary roads that would otherwise never be addressed using the current evaluation procedure.

Cosgrove added that a majority of VDOT funds are allocated for road maintenance rather than new projects, and that funds used for maintenance are constitutionally mandated.

Isle of Wight Transportation Director Jamie Oliver said that VDOT’s budget covers fixing potholes in the county but asked if there was any hope of expanding an 18-foot-wide road to 20 or 22 feet or getting the county’s one-lane bridges up to a standard width. She also said that Smart Scale applications were originally supposed to be done with county VDOT staff and not cost anything, but now it takes multiple third-party contractors and specialists.

“That’s a lot of money to invest if they don’t even know the project will be funded,” she said.

Cosgrove said the need for third-party specialists stems from regulations outside of VDOT’s control, such as wetlands protections and other regulations imposed by the U.S. Environmental Protection Agency and Virginia Department of Environmental Quality.

“That’s where a lot of that money goes,” he said. “I wish I could wave a magic wand and make them go away because a lot of them are stupid, but I can’t.

“We can help when it comes to DEQ, but their hands are tied with things like the Clean Water Act. The permitting process costs a lot of money, which could be used for asphalt but instead it’s used for paper.”

Cosgrove concluded by saying that the Senate’s deadline for pre-filing bills was Dec. 8, and that before the start of the 2018 General Assembly session, there are only eight more he can file.