Riverkeeper report: The river taketh and the river returneth 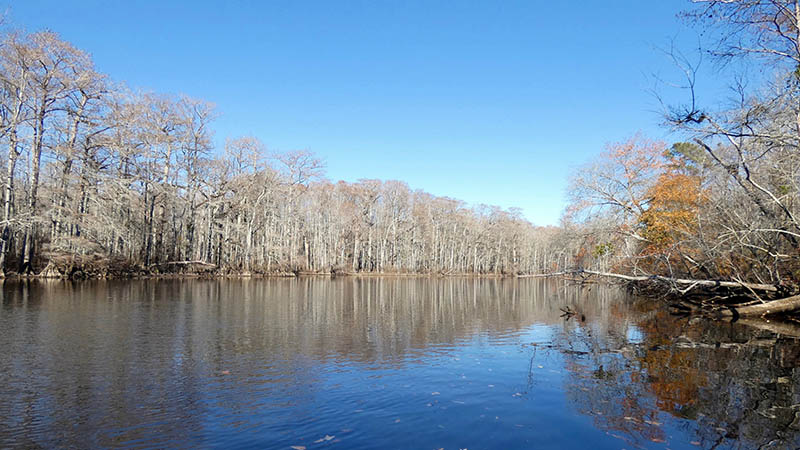 Spirit of Moonpie and I spent the 1st through the 3rd on the Nottoway below Delaware. The water was 48 degrees. Air temps ranged from 30 to 65. Trash was practically nonexistent.

The water is in terrible shape, though, as of this writing. It is stagnant and nasty from lack of good strong outflow. We need some substantial rain upriver to flush it out.

I caught a few fish jigging the quarter-ounce silver blade bait. It was a mixed bag of catfish, yellow perch, redeye, bass and bream. I only casted for about an hour, but did not have any luck.

Once again I had another “first” happen on this trip. At the end of the second day, it was getting close to dark and I needed to clean the three catfish I had caught. I transferred the three fish from the livewell to the floor of the boat and set about the task of cleaning fish before the darkness of the river closed over us. It was already getting cold that night so I was cleaning away fast as I could when I heard Moonpie say “Hey, Daddy-O, I think we got a problem.”

Very intent on what I was doing and in a race to beat darkness I did not even look up but just snapped back, “Whatya want? I’m a little busy, you know.” Taking offense to this tone, Moonpie said, “Okie dokie. I was just trying to help you. It’s not that important I guess. I’ll leave you alone.” I just grunted and reached for another fish. ‘Bout the time I was finished cleaning the second catfish I heard Moonpie giggling. I finally looked around and could not believe what I was seeing. My float jacket that was lying on the floor of the boat was waving at me with one arm.

I looked at Moonpie and changed my grip on the fillet knife, ready to defend myself.  That’s when I noticed the third catfish was missing. Sure enough, after cautiously grabbing my jacket I discovered that third catfish had actually swam up my right arm sleeve of the float coat. I had to then dump it out inwards because of the catfish’s fins it would not come out the way it went in.

I finally finished cleaning that unruly fish just about dark, started the boat and told Moonpie to hold on as we had to haul tail upriver to camp. Not thinking I grabbed my coat and thrust my arm into what I can only describe as a mucousy stinking sleeved mess. I turned around and looked at Moonpie, who shrugged and said, “I ain’t saying a thing.” So I had to deal with catfish arm that whole night … not good.

Those of you that follow my reports might notice I went back to exactly the same place I went to last patrol. The reason is on the last day on the prior trip I lost my expensive Bench-Made pocketknife. So I grabbed my big magnet when I left the homestead for this trip in hopes I could find it. However, I was pretty sure it had fallen out in the water at camp and was deep in the mud by now. I began looking for the knife as soon as I arrived on scene.

I tried dragging the place where I tie the boat up and I also dragged the magnet all over camp. Nothing! Everywhere I stepped for those three days I was looking and looking and every time I felt something the least bit strange under my boot, I would stop and look … NOTHING.

So on the third day I was packing up and had resolved myself to the fact the expensive gift from Freezing Deer was lost forever. It takes me about an hour to load everything in the boat nowadays because I have such a terrible time getting around. So I have to be very methodic and very slow to avoid getting hurt.

I had one last armful of wood I was putting back in the boat that I did not burn the night before.

It was the last chance possible to find the knife, as I will most likely not be going back to this camp till spring. I grabbed the wood and turned around to head for the boat and, lo and behold, there was my knife lying right there at my feet. I was so surprised I dropped the three pieces of wood on my foot. If the water had not been as low as it was I would not have found it.

As has often happened to me on the rivers, the Lord taketh stuff and this time the Lord returneth on the two rivers we call the Nottoway and Blackwater.