ISLE OF WIGHT
Mark Munford has been associated with Isle of Wight Academy in one capacity or another since the 1970s when he first set foot on the campus as a student. Now, he’s the school’s new headmaster.

Munford took over as the school’s top administrator in July of this year after his predecessor, Benjamin Vaughan, retired, having held the position for 47 years. Munford, a native of Isle of Wight, described his career move as “coming home.”

“I graduated from here, I taught and coached here, my daughter goes here,” he said. 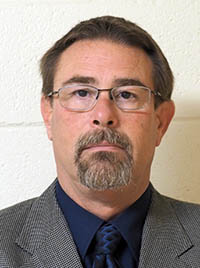 Despite his years of experience at both IWA and other schools, Munford said he still learns something new nearly every day.

“I do not think I could have anticipated all of the details, questions which come up on a daily basis,” he said. “If you are not part of the day-to-day operations, you would hard pressed to know all that goes into running a school of this size.

“Mr. Jack Reynolds, [assistant headmaster], who has been on the faculty in a variety of roles for 48 years, has acted as a sounding board and advisor. We are truly a team when it comes to operating IWA.”

Munford comes to IWA with a mix of private and public school experience. His most recent former position was at Denbigh High School in Newport News, where he had taught since 2000. Prior to that, he had served as a teacher, coach and dean of students at IWA from 1998 through 2000, also having taught various subjects and coached various sports at IWA from 1990 through 1995.

He has also taught at Windsor Middle School and coached at Windsor High School. He has a bachelor of science degree and master of arts in teaching from James Madison University.

When asked what he felt the main differences were in working at a private school versus a public one, Munford said that the overall goal was the same: to turn students into lifelong learners who are citizen and career ready, whether they go straight into the workforce or to college or a trade school. The difference, he explained, is that public schools in Virginia are bound by the Standards of Learning tests, whereas IWA is not.

“So, we can go a little more in depth, but students are students,” he said. “We have a curriculum based on national standards. We still give a standard Virginia diploma without the SOLs. Our base mission is college prep. We have a good reputation with colleges.”

Additional short- and long-term goals Munford has for IWA include reviewing the most recent commendations and recommendations of the accreditation committee and looking at the school’s technology plan and curriculum map with his administrative team.

The school’s Board of Directors is currently moving forward with a new storage facility on campus and an upgrade to its existing media center. Munford also hopes to keep IWA involved in county affairs.

“We’ve been around for 50 years and would like to remain a part of the community,” he said.