Looking back: Rawls Garage equipped for all motorists’ needs

The recent completion of a two-story brick addition to Rawls Garage on Fourth Avenue, and the thoroughly modern machinery with which this establishment has been equipped, gives Franklin a garage service that is not excelled in or by any town in Virginia. The garage is admirably and conveniently located for motorists, locals and tourists, it being on the direct route of the Norfolk – Richmond Highway, as defined by the Tidewater Automobile Association. Called the “Ridge Route,” the Norfolk to Richmond Highway (by way of Portsmouth, Suffolk, Franklin, Courtland, Sebrell, Homeville and Petersburg), is the route most travelers now use. The route carries the highway right through Franklin. 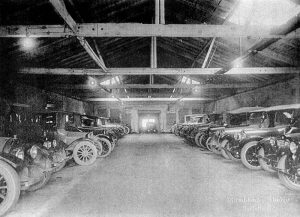 The interior of Rawls Garage, circa 1920, on Fourth Avenue. This later became the location of the Electrical Equipment Company.

Incidentally, Mr. S.W. Rawls, manager of the garage, has taken an active interest in the “Ridge Route” project, first established several years ago.

The Rawls Garage expansion gives Mr. Rawls additional floor space of 50 by 200 feet. The second story of the addition is used as the garage repair shop and is accessed, from Fifth Avenue, by an inclined driveway.

This keeps cars stored on the first floor free of dust and dirt resulting from repair work; and, those vehicles are protected from the danger of fire. The building is thoroughly fireproof. An interesting device, between the local and tourist storage rooms, is a large fireproof door, which closes automatically in the event of fire breaking out in either room.

The building throughout is heated by a 20-horsepower steam boiler; cold weather car troubles will be avoided hereafter when cars are stored at Rawls garage. A major part of the garage’s services is the fact that motorcar owners may have their vehicles stored there, especially during winter months. 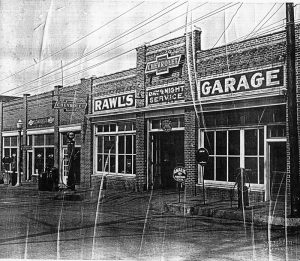 Mr. Rawls is to be congratulated on the progress shown by him in the automobile SALES business.  Here in Franklin, a few years ago, he opened a small garage from which he developed a splendid business in sales, repair, and storage. Buick, Oldsmobile, Dodge and Saxon cars — and Republic trucks are sold and kept in stock by Mr. Rawls; and, he has a large line of automobile parts and motoring accessories.

(NOTE: Later, Rawls Garage added other lines of motor vehicles, such as Chevrolet and Hupmobile, and continued to be a major factor in the Franklin area economy for several decades. Eventually, in the late 1920s – early 1930s, when Mr. Rawls phased out his automobile business and concentrated his business interests into fuel oil/gasoline and service station businesses, the Rawls Garage location was occupied by other business owners.