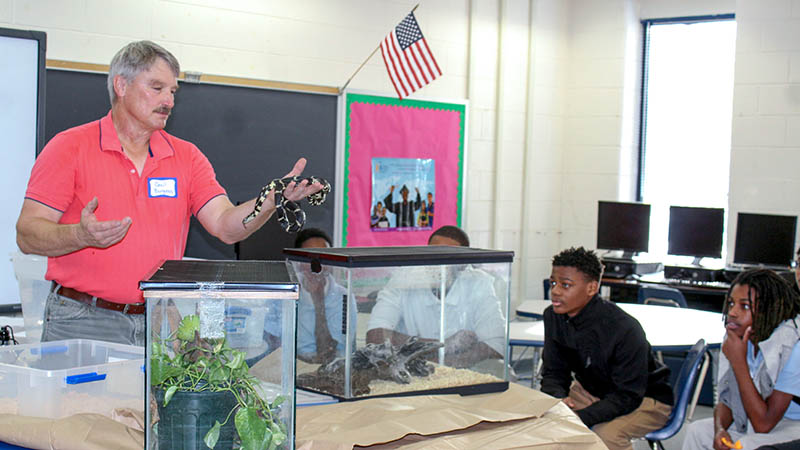 FRANKLIN
On Dec. 5, J.P. King Jr. Middle School held its first “Terrific Tuesday” of the school year and its first such event in approximately 10 years. Held during the last hour of the school day on Tuesday, the event was designed to provide students with exposure to a variety of careers and potential interests.

Grades six through eight each participated in the event, with different activities available to each grade level. Sixth graders had the option of attending a session on fitness, led by guest speaker LaKenneth Kindred of Taylor Made Fitness, construction 101, flag art, “tasty treat Tuesday,” a softball exercise titled “It’s Outta’ here,” a medical know-how session or hydroponic farming. Seventh graders could participate in T-shirt making, soccer, a dance-on, a DJ class titled “Droppin’ the Beat,” a class with Franklin Fire and Rescue personnel, or a cake decorating class titled “Creativity with Icing.” Eighth graders had the options of going to a music class titled “J.P. King Rocks,” a culinary arts class, a session with Franklin High School’s JROTC students, a presentation by Cecil Burgess and his daughter, Betsy, titled “Snakes Alive,” cheerleading with the FHS cheerleaders, a movie-making class titled “Lights, Camera, Action,” or a career exploration session.

The career exploration session was led by Nahla Saleh, coordinator of the Opp. Inc. Youth Career Center, and included a manufacturing and distribution exercise titled “The Cookie Don’t Crumble.” Saleh had students attempt to design packaging for a bag of cookies sturdy enough that it would withstand being knocked around when shipped.

“This is what real people who go to college do, they design this,” she said to students while holding up one example of a student’s packaging.

To test the durability of each group’s cookie package, Saleh picked each up and threw it to the floor to see how many, if any, of the cookies inside cracked or crumbled.

Liz Burgess, J.P. King’s gifted resource teacher and “Terrific Tuesday” coordinator, said that this was the first of two such events the school would hold this school year. Principal Lisa Francis had asked Burgess to revive the event in August after its nearly 10-year hiatus.

Francis said that she wasn’t sure exactly when or why “Terrific Tuesday” had been done away with in the past but theorized that it may have had something to do with SOLs protecting instructional time.

“However, when we reached accreditation this year I wanted to bring it back,” Francis said. “Our students deserve this. They are amazing and work so hard. Fun was had by all.”

The second “Terrific Tuesday” at J.P. King will be held sometime in March.