FRANKLIN
A Franklin man and a juvenile are in custody after having been arrested on robbery charges, according to Capt. Tim Whitt of the Franklin Police Department. 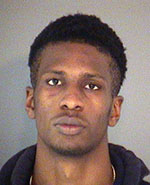 A Franklin man is in custody after having been arrested on a robbery charge, according to Capt. Tim Whitt of the Franklin Police Department.

De’Vian Tymel Worthy, 18, was found after a search following a report of robbery in the 400 block of West Fourth Avenue on Tuesday. Officers responded to the call at 11:34 a.m. Whitt stated that upon arrival, they learned that the victim, a 74-year-old female, had returned from the bank and was holding an envelope containing an undetermined amount of cash when she was approached by two suspects. The suspects told the victim that they wanted the money and grabbed at the envelope in her hand. Fearful of what the suspects might do, she relinquished the cash and they fled.

The suspects’ descriptions were broadcast and police located a person — Worthy — matching the description two blocks away on Cameron Street. While detained, it was discovered that he was in possession of a loaded 9mm pistol. Officers placed Worthy under arrest and he was transported to the police department for further investigation.

Continued investigation led to him being charged with the robbery as well as weapons violations, specifically concealing a pistol and brass knuckles. Worthy, whose address is in the Dorchester Street Apartments, was also charged with the burglary and attempted burglary of residences on Woodland Drive, which occurred Dec. 1. He was remanded to Western Tidewater Regional Jail without bond.

On Thursday morning, the second suspect was identified as a 17-year-old male after his parents brought him to the police department. He will be remanded to Chesapeake Juvenile Services, which handles youth offenders from Franklin, Suffolk, Isle of Wight, Southampton and other Hampton Roads agencies.