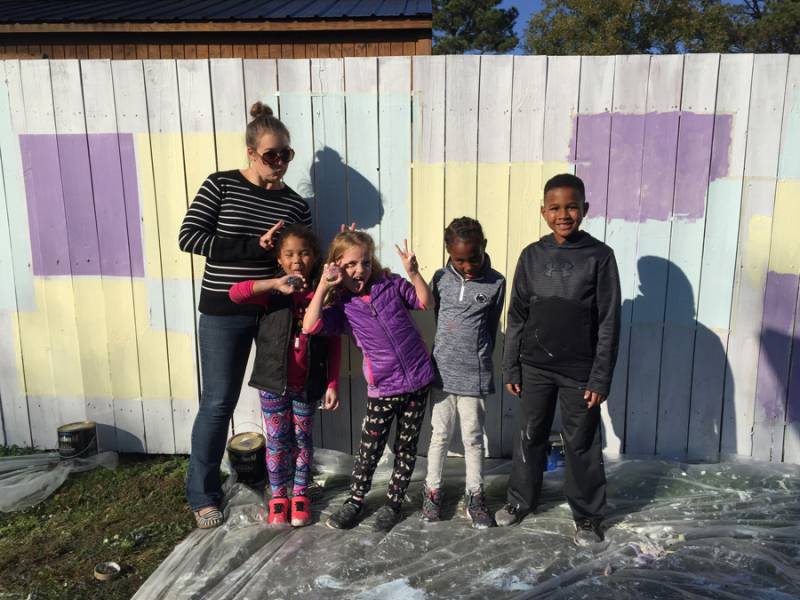 From left are Marie Berkeley, Chloe Woodard, Alice Kelly, Kamile Buggs and Kyle Buggs in front of the fence they recently started painting. They belong to the Cardinals CARE Club at Carrollton Elementary, where Berkeley — formerly of Windsor Elementary School — now teaches. They came down to help the Windsor project.

Mural being painted on fence by park, library

Jennifer Bak is remembered by those who knew her as a person that deeply cared about Windsor and making the town a better place in which to live. Many will recall that she led Girl Scouts of Troop 1105 for over 10 years. In the summer of 2015, for example, the girls co-created murals with a professional artist on either side of the building across from Town Hall on Windsor Boulevard. Bak also implemented the food pantry at Windsor Elementary School. Teachers distribute snacks to students, particularly those who they think might not be getting enough to eat at home.

Although she died this past April, Bak’s legacy of service continues through the scouts and, more specifically her family: husband Alan and daughters Sydney and Andrea.

“My mom was so community oriented,” Sydney said recently.

Marie Berkeley, formerly the guidance counselor at WES, has been working with Sydney to do one more thing that Bak wanted to achieve in her life.

“Jennifer used to talk a lot about doing something about this fence at Robinson Park beside the library,” said Berkeley, who now works at Carrollton Elementary School. “She did so much for me and WES with the food pantry and trash can project. She was big on Windsor and bringing art to the town.”

Working with Sydney, they have taken the steps to clean, prime and paint a mural of shapes and faces on the fence. Donations from Sherwin-Williams paint store and a fundraiser at Cazadores in Suffolk enabled them to keep down expenses.

Helping hands in painting also came from the Cardinals CARE Club at Carrollton.

A dedication ceremony will be announced later on completion.