Spirit of Moonpie and I spent the 14th through the 16th on the Nottoway below Delaware. The water was 48 degrees. On my prior trip on the 2nd of November, the water was 63, that’s a 15-degree drop, which is a lot when talking about a body of water. Air temps ranged from 65 to 32, which was pretty nice. 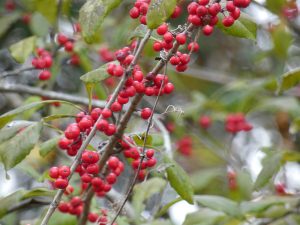 Trash was practically nonexistent as I picked up only three bottles.

The water was crazy low the entire trip and had some kind of yuk floating on top. I imagine it just from low flow conditions, stagnant swamp poo!

Even though it’s more dangerous for hitting logs, etc. when the river is this low, it is so fun just to idle along the shoreline and look at stuff. You get to see all kinds of neat things you can’t normally see when the water is up.

On the Moonpie Critter Patrol we saw a bald eagle each of the first two days. I believe it was the same bird as it was unusually large. We really didn’t see a whole lot of wildlife this trip. Even the coyotes we usually hear at the Hand Site (an old Native American Village) did not sing at night like they usually do. I did get a good audio recording of an owl the second afternoon. We were fishing along and that thing lit up and ‘bout scarred little Moonpie out of the boat. It was really close, but I never could get eyes on it. I tried to post it on Facebook, but the file was too big or something.

The fishing on this trip was great and I was surprised because of the 15-degree water temp drop. Evidently the fish have already adapted. I caught a catfish while jigging for stripers, several jacks and several bass to 2-½ pounds. All were caught on a yellow A.C. Shiner. Wow!

I came across this bush/tree that was just loaded up with these bright red berries. I asked around and it is either Possumhaw/Winterberry or Yaupon — both look a lot alike. Yaupon around here is mostly near the coast, according to Wikipedia, so I first thought it must be Possumhaw. Both are a type of holly.  Native Americans used both for medicinal purposes. In fact another name for Possumhaw is Fever Bush. However, Possumhaw loses its leaves in the fall/winter and Yaupon is evergreen. The leaves on this plant did not look like they were going to drop anytime soon so I changed my mind and decided to go with Yaupon. However, I was told we have not had a hard enough frost (especially along river) to make the leaves drop yet, soooo, Possumhaw it is on the complicated two rivers we call Nottoway and Blackwater.