Trio of honorees inducted to Wall of Excellence 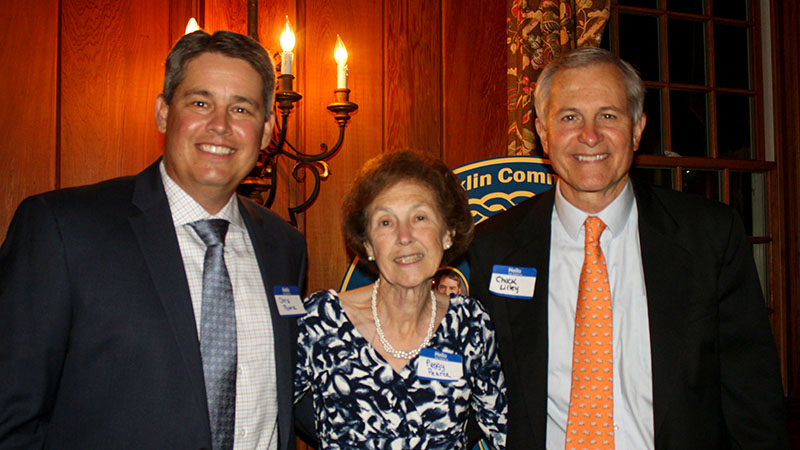 FRANKLIN
The three new members to the Franklin Community Wall of Excellence were inducted on Saturday night. The program, which took place in the Cypress Cove Country Club, was largely attended by family and friends of the honorees: Retired Brigadier General Sheila R. Baxter, Sol Waite Rawls Jr. and the late Charles G. Pearce.

Nominated and introduced by brother Bruce, Sheila Baxter will be noted on the wall at the high school for her academics and career. A 1973 graduate of Franklin High School, she went on to earn a BS in health and physical education at Virginia State University. Later, Baxter received a master’s in health services management from Webster University. She has also attained a Master of Divinity degree from the Interdenominational Theological Center in Atlanta. 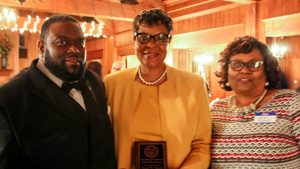 Starting in 1978 as a commissioned second lieutenant, she spent 30 years in military service, and by 2004 was promoted as brigadier general, the first African-American woman in the Army Medical Service Corps to achieve this rank. Baxter has also served in the Gulf War of the early 1990s. Bruce said of her, “She cared about not only her soldiers, but also their families.”

Baxter told all gathered she had been invited to another function for that evening, but that this one took precedence, of course.

“I’m going home … and it’s such a great home,” she said, adding her gratitude to her Lord. “To God be the glory, without whom I would not be standing here.

“I’m deeply honored and grateful. It’s indeed special to me. No success is achieved without the people around you.”

Among those were her parents, the late John and Mary Baxter, whose “legacy continues. They made sure we got an education. I dedicate this honor to them.”

Siblings Bruce, Karen Futrell, Nadine Baxter-Atkins and the late John Baxter Jr. were also thanked, and Baxter concluded with a quote from a Mahalia Jackson song, “If I can help somebody, as I pass along … Then my living shall not be in vain.”

“Why did I nominate Charles Pearce,” said Chuck Lilley. “He simply prepared me and thousands of of other Franklin High students to become productive citizens. He was always organized and paid attention to details. His teams were always well conditioned — lot of wind sprints.”

Lilley continued that among Pearce’s best attributes were his calmness in stress, preparedness, an ability to assess weakness in order to strengthen players, fairness and hard work.

Honored posthumously for his outstanding service, Pearce in his life earned a BS degree from East Carolina, then a Master’s in education from Old Dominion University.

He first began as a health and physical education teacher at Gaston High School, and became the head basketball coach and assistant football coach. He and wife Peggy moved to Franklin in 1966 and did similar work at FHS, including athletic director and driver’s education instructor. Later, Pearce became an assistant principal.

The coach is also credited with launching the adult education program in city schools and was its director for many years.

In acceptance of the award, his son Chris that “I felt he always had two families — Franklin High and us, but I never felt second. I never felt left out.”

Pausing for a moment to collect himself, Chris pointed to his children for whom Pearce “would do anything for them,” and that included attending many a Barbie tea party or wearing barrettes. A remark that inspired smiles and laughter among the audience.

“My dad always admired other successful people,” Chris continued. “He said to always be concerned with your character than your reputation.”

Sol Waite Rawls III, accepting for his father, first said, “It means a great deal to me to be and my father to be introduced by Clyde Parker [who had nominated the Rawls for the category of academics and career.]”

Waite described his father as a modest person who doesn’t like to take credit for his accomplishments, among which are working in his father’s business, to which he eventually became the president and board chairman.

In 1954, Rawls organized the first Franklin Chamber of Commerce and served as its first president. He later donated the building where the Chamber is now located. Rawls was reportedly instrumental in creating the Raiford Memorial Hospital, and later led in the organizing and establishing of Southampton Memorial Hospital, and that included the land for it. The same went for the Franklin YMCA, and giving land for the Village at Woods Edge,  as well as the existing Franklin High School.

Speaking of education, his program biography adds that Rawls had persuaded the Virginia Community College System to set up a college in Franklin.

A member of Virginia Military Institute, from where he earned a degree in chemistry, Rawls has served on its Board of visitors and as president of its alumni group.

The son also said that his father — who recently became 98 years old — mentioned that his obituary should simply state to the effect, “I was born in Franklin, went to VMI, and died in Franklin.”

Pointing to his father’s legacy, Waite said, “You can be what you reach out to be.”

This new set joins the inaugural names of William H. Goodwin Jr. of Charlottesville, Larry B. Rose and the late Colgate W. Darden Jr. and Peggy H. Wilkins. The program was set up last year by concerned residents to not only honor contributors to Franklin, but also to serve as inspirations to students that they can also achieve greatness through service to other people.