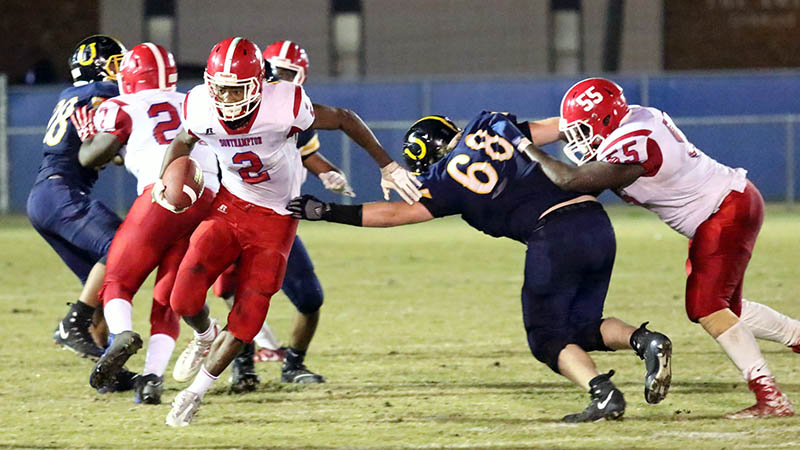 Tayriel Ruffin breaks through a line on a run. -- Frank A. Davis | Tidewater News

FRANKLIN
As usual, the stands and sidelines were packed as many spectators merged to Armory Drive Football Stadium on Friday for the annual “Backyard Brawl” between the Southampton High School Indians and the Franklin High School Broncos.

To no surprise by many, the game went as highly expected with the Indians strongly outscoring the Broncos in a 56-0 blowout victory. The Indians showed their power early in the first quarter of play as they ran off 28 points. Scoring two each were Shamon Reid-Wilkerson and Tayriel Ruffin. Ruffin added two more touchdowns in the second quarter and led in rushing with 262 yards. Also scoring for the Indians in the second quarter was Jonathan Hall. Connecting in all extra point kicks was Sean Holloway.

During half-time, inductees of the Franklin Wall of Excellence Hall were escorted to center field and introduced with their accomplishments for being selected.

The second half went quick with a running clock and the Indians added their final touchdown in the third quarter on a run by Domonte Holiday. The Indians being gracious on many plays in the final minutes of play took a knee and turned the ball over to the Broncos.

For the Broncos, they only rushed for 91 yards and in passing had 122 yards. Dashawan Butts led in tackles with 7.

For the Indians in rushing they gained a total of 432 yards and 14 yards in passing. Jonathan Hall led the team in tackles with four.

Southampton head coach Littleton Parker said after the game, “I thought the kids worked hard this week and prepared for this ball game. They got out and executed well, and that is the biggest story with it.”

Because of their overall record, the Indians will advance to the playoffs, but at the present time he did not have any information on whom or where they would play. 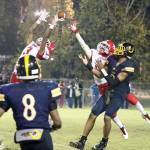 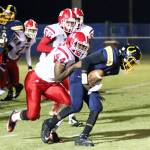 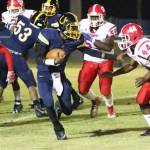 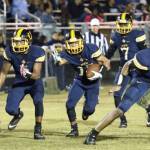 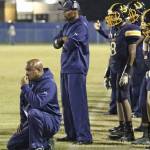 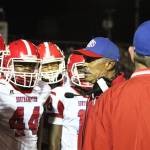