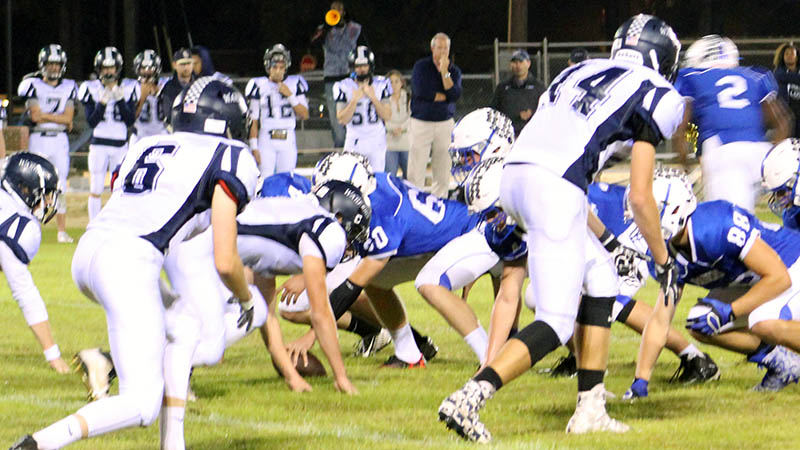 COURTLAND
Even before the first game of 2017 had been played, Southampton Academy football players and crew had pencilled in Nov. 3 and 11 on their calendar, expecting to participate in the NCISAA State Semifinals.

That was not to be … though not without trying.

On Oct. 20, when the Raiders had defeated the Warriors of St. David’s School at 40-36, SA’s record became 6-3 for the season. That had put the school in a three-way tie with St. David’s and Faith Christian. The No. 1 and 2 seeds had already been decided, according to Dale Marks, head football coach and athletic director for the Raiders.

“That left us out in the cold,” he added.

The coach pointed out that during the season a few Raiders were knocked out of play.

“We had some crucial players injured. Sam Rose had a shoulder separation injury in the middle of the season, and Braxton Hubbard had hurt a knee — both season-enders — and Ricky Evans was out of the last two games because of a concussion.”

Overall, though, Marks was pleased by both the season as well as last month’s victory.

“It was a good way to end the season, even though it ended sooner than we would have liked,” he said.

The Raiders got their first six points in the first quarter at 5:56. Josh Smiley had caught the ball from Caleb Kidd and ran for 15 yards; the run failed for the two-point conversion.

In the second quarter at 10:41 on the clock came their next touchdown. Ian Mizelle ran for eight yards; another run for two more points failed. At 8:36, SA earned its third touchdown. Montae Barrett ran for 46 yards; again, no extra points.

St. David’s got its first touchdown at 3:33 when Taijae Goode caught a pass from Hudson Taylor and ran one yard for the points. The conversion was good.

Barrett caught a run with 50 seconds left and ran for eight yards to get the Raiders’ fourth touchdown. Smiley caught a pass from Kidd to get the two points, putting the score 20-8  by the end of the half.

In the third quarter at 10:29 on the clock, the Warriors’ Walker Taylor caught the ball from William Taylor and ran for 10 yards to the goal, followed by Walker’s successful run for two points. St. David’s scored again at 7:13 when Goode got the pass from Taylor and ran 14 yards, followed by another Walker run to a conversion.

Raiders’ Mizelle ran for 79 yards to get the team’s only score of the quarter at 6:05, but the following pass failed.

At 3:56, the Taylors of St. David’s succeeded in a 31-yard run to a touchdown, but their next pass failed.

In the fourth quarter, the Warriors got their next goal with 2:46 left after Walker ran for two yards; the run failed.

Then, with only 5.5 seconds left, Mizelle caught a pass from Kidd and ran 16 yards to the touchdown, and Smiley caught the pass from Kidd for the last two-points.