FRANKLIN
It wasn’t just about backpacks to Dr. Adolph Brown, the keynote speaker for the PDCCC STEPs team’s inaugural Student Leadership Conference. It was more about what is in them, and that is what he relayed to his audience. 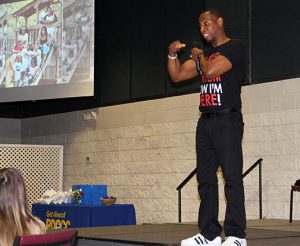 The motivational speaker sported a T-shirt near the end of his presentation printed with the words “Started from the bottom, now I’m here!” — Wendy Harrison

Brown succeeded in duping conference participants or at least confusing them, as he stood on stage. While everyone’s attention was on him, someone came bounding through the conference hall sporting camouflage pants and a bandana, promptly parking himself in a seat that was only momentarily unoccupied.

He refused to move and slid the former occupant’s personal belongings aside. Then, the baggily clad man made a beeline to the stage, much to onlookers’ chagrin, until they realized he was, indeed, Dr. Adolph Brown, and the person being introduced to the stage was actually his assistant.

His message was as bold as his disguise: do not judge. “Judging says more about you than me,” he said. This was just one of the many poignant messages he delivered to the students to help them personally, as well as academically. 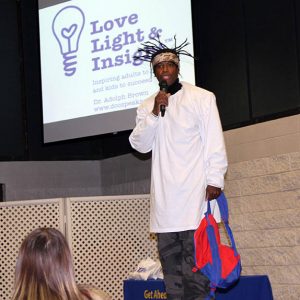 Brown describes his second backpack, while stressing the importance of releasing its contents. — Wendy Harrison

The motivational speaker held up his backpack and explained that he had one to carry his books and supplies. However, he also had a second backpack, which served as a metaphor for baggage — all of the negative experiences and ill feelings inside a person.

Brown worked his way out of the projects, out of destitution, and survived growing up without his father and dealing with the murder of his brother. But he never lost hope nor his positive attitude, thanks to his mother, his aunt and his grandfather, a farmer in Wakefield.

“As long as you’re living, nothing is so bad that you can’t overcome it,” he said.

He spoke to the students about work habits, attitude and growth mindset.

“You accept a challenge, knowing that sometimes, you are going to fail,” he said of the mindset. “But failing doesn’t make you a failure. Perfection is not attainable.”

Brown holds several degrees from The College of William and Mary, and was the youngest professor ever tenured in the United States at age 29. He is a master teacher, business leader, educational/clinical psychologist, anthropologist and a humorist.

Melissa Coward of Franklin, a non-traditional student, is working on attaining her GED and said she was glad she attended the first Student Leadership Conference.

“I was from the projects in New York, so I could identify with Dr. Brown,” she said. “I have learned so much.”

To find out more about Brown’s many initiatives and achievements, visit www.docspeaks.com.