FRANKLIN
On Tuesday, residents of the city of Franklin, Southampton County and Isle of Wight County will have the opportunity to cast their votes in Virginia’s gubernatorial election. Polls will open at 6 a.m. and close at 7 p.m. 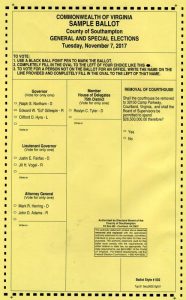 Though all will have the opportunity to vote in the gubernatorial race, the ballots for residents of Franklin, Southampton and Isle of Wight will differ slightly in other matters being put to vote.

On the ballot for most wards in the city of Franklin is the House of Delegates seat for Virginia’s 75th District, in which Roslyn C. Tyler, a Democrat, is running unopposed. Part of Ward 2 of the city is located in Virginia’s 64th District, meaning residents of that ward will have the opportunity to vote for either Rebecca S. Colaw – Democrat or Emily M. Brewer – Republican. Or they may cast a write-in vote.

Also on the ballot for Franklin is Brenda B. Rickman for commissioner of revenue, and Dinah M. Babb for treasurer, both running unopposed.

There is also one ballot question concerning the future of the Southampton County Courthouse. That question reads: shall the courthouse be removed to 30100 Camp Parkway and shall the Board of Supervisors be permitted to spend $26,500,000, therefore? The only answers voters may give are “yes” or “no.”

For residents of Southampton County, ballots will include the candidates for governor, lieutenant governor, attorney general and the House of Delegates seat for the 75th District, as well as the courthouse referendum ballot question. Residents of the Town of Branchville will also have the opportunity to vote for three town council members, though only one, Kelly Joe Ray, is listed on the ballot, leaving voters with two or three write-in options.

On the ballot in Isle of Wight County will be the candidates for governor, lieutenant governor, attorney general and, for most of the county, the candidates for Virginia’s 64th District House of Delegates seat. Parts of the Carrsville community are located in the 75th District and will have the option of voting for Tyler or a write-in candidate. Residents of the county’s Hardy District will also have the opportunity to vote for either Rudolph Jefferson or Herbert W. DeGroft for Board of Supervisors and Alvin W. Wilson or a write-in for school board.

There are no ballot questions for any parts of Isle of Wight County.